Firstly Happy New Year to all Scavenger Hunt Bloggers. Thanks Hawthorn for starting 2017 with such a varied selection of topics which looked quite daunting at first.  Had to put my thinking cap on and once again go back into our family archives.

Many years ago we were spending Christmas with my parents in Capetown when there was a fire on Table Mountain.  My parents lived in Camps Bay which is round the  west, Atlantic side of the famous mountain where it is known as the Twelve Apostles due to their being a  group of 12 small mountain peaks that run along the coast.

We had seen the smoke high up on the mountain top and gone to bed when there was a banging on the door.  People were rousing the residents that lived highest on the mountain side as the wind had changed and the fire had spread over the top of Table Mountain.  We did not leave our flats but all kept an eye on which way the fire was moving.  Rather scary. The picture was taken then next day whilst the fire was still burning. You can see two of the Twelve Apostles in the photograph. 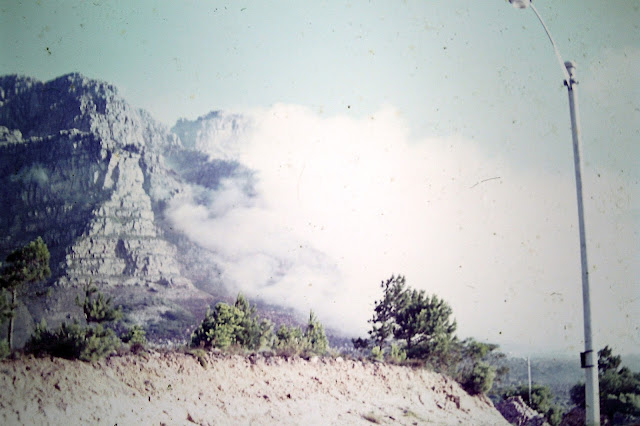 Twilight is not a concept we are used to as in Central and Southern Africa the sun sets and it is dark ...gone, just like that.  So this picture taken on Lake Kariba on the Zambezi River on the borders of Zambia and Zimbabwe has caught the sun just as it was disappearing.  In the foreground is one of the petrified trees that are all round the edges of the vast lake  where hill tops were flooded as it filled.  You can see many more further out and can see how they can be quite a danger to the many fishing boats on the lake. 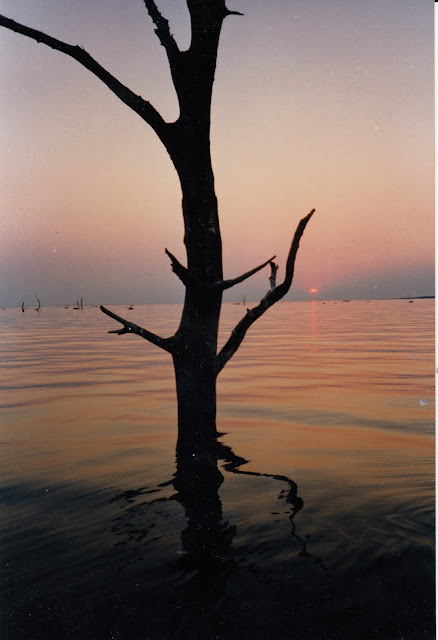 There is nothing special about this fan except its size.  We bought it some years ago in a second hand shop for Hawthorn who wanted it for the cubs when they were studying the Chinese New Year.

It is obviously a fan made for the tourist market but it was huge, at least 60 cms across. 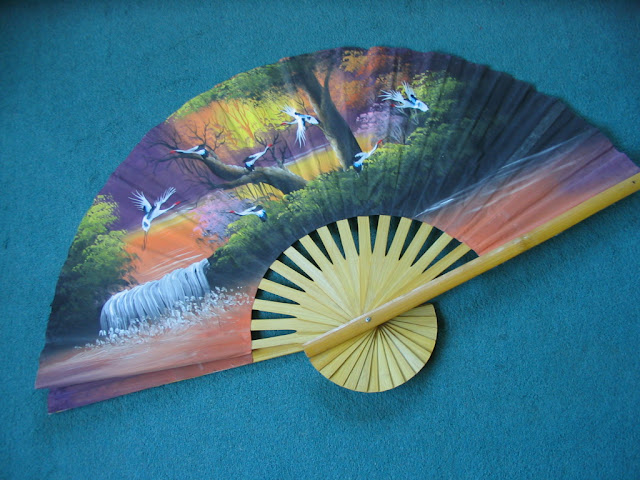 Whilst living in Mpumalanga, South Africa, Hawthorn and her family had given her dad the most beautiful long haired German Shepherd called Ben – after Gentle Ben, the bear in the old  TV Series (remember it?).  He was such a fluffy puppy he looked like a baby bear.  My husband was a military dog trainer having been trained by the police in the then Rhodesia.  Friends who knew of his past and how well he was training Ben asked him to start a dog training school where we lived.  So together with Hawthorn and a bit of input from me they started the Kiepersol Dog Training School.  Not only did they help train local dogs, but more specifically their owners as they are usually the cause of badly behaved dogs!!   After a while when a few dogs were well enough trained, the newly trained dogs and their owners worked with us to put on agility and obedience displays at local venues and small shows.
This is a picture of Ben posing behind one of the hooped jumps used for training – my choice for a circle. 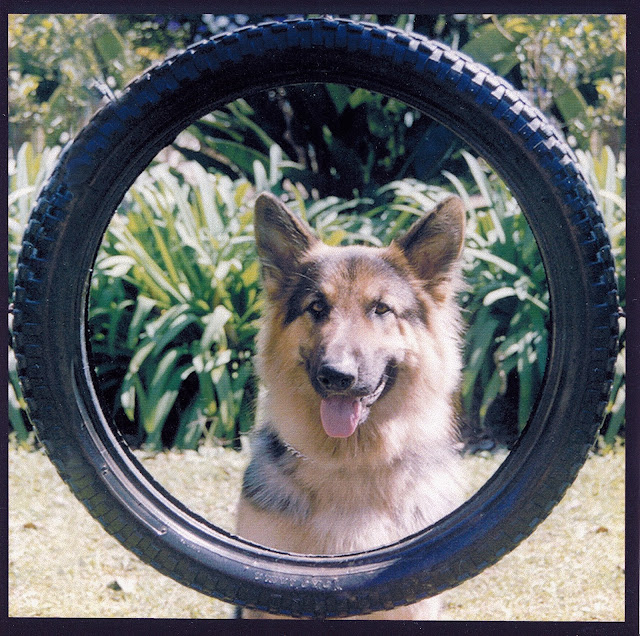 This is a sign not seen very often I am sure. It was near a lake in the grounds of a holiday resort in Hazyview, Mpumalanga, where we lived. 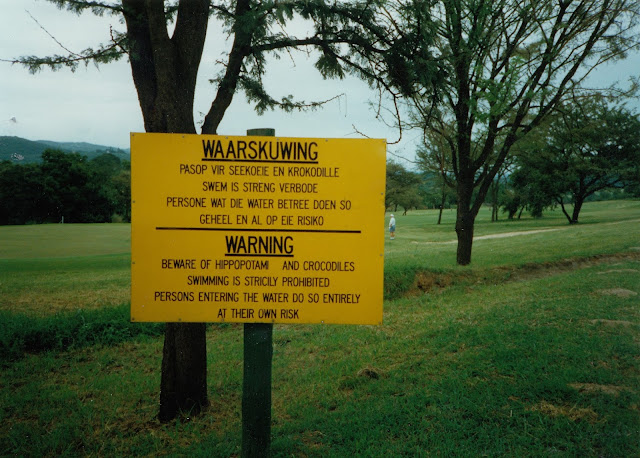 I could have chosen pictures from our many holidays in Kariba where the temperatures were regularly over 40 deg but I was drawn back to our dogs.  You have already met Ben in my ‘Circle’ entry but this is Hawthorn's dog Henry - a rescue dog.  This picture was used by the local newspaper under the heading ‘Firefly’.  He too loved the training and took to jumping through fire like the willing little collie that he was. 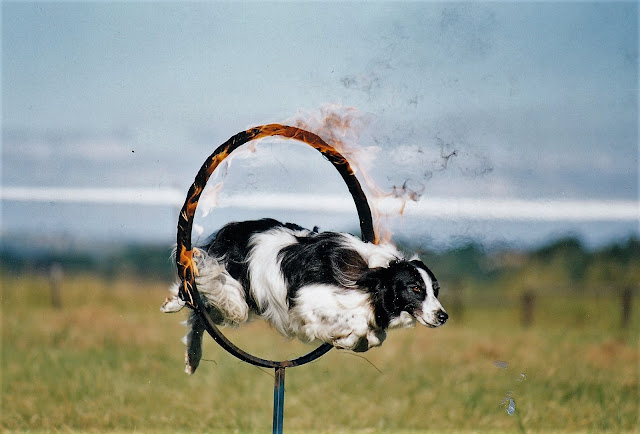 
It was our daughter-in-law’s birthday and I made this huge layered jelly for a pudding.  I had seen pictures of layered jelly and wanted to try it.  The different colours are not so obvious in the photograph, but it was delicious with all the fruit.  Kate had made a chocolate fondue with fresh fruit to dip in and a gorgeous toffee sauce. Mmmmmm. I remember it well. 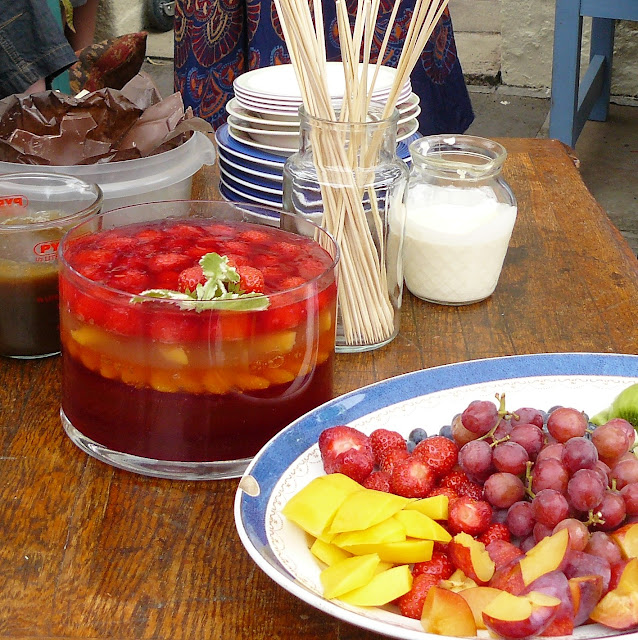 We used to have a Goat Willow (Salix Caprea) tree outside the side window of the lounge in our flat.  Sadly the roots got too big and it was breaking down the wall and fence between our flat and the school playing fields next door so the council cut it down.  (I am glad to say it is growing up again, but they have not noticed).  We used to hang bird feeders in the branches nearest our window and I was lucky enough to get some lovely pictures of birds and our squirrel visitors. 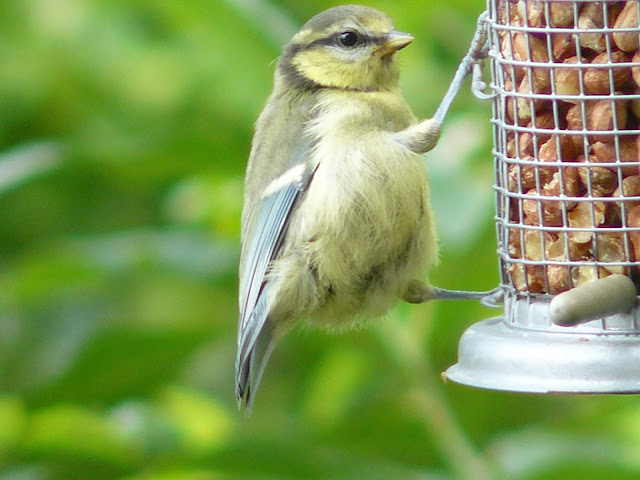 I have been checking my garden ever since Hawthorn published the list but to no avail.  I have nothing exciting flowering in my garden.  I do have single viola's here and there but nothing worth putting on this post.  Then suddenly my Hebe burst into flower, albeit little flowers, nothing like it normally has in autumn.  I think it is confused.  Anyway, it did supply me with something to photograph. 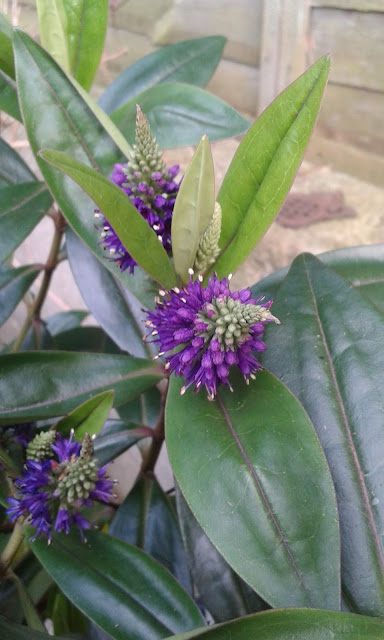 I know I have used dogs twice already in this post but having found the photographs I just had to include this one of Ben showing off as usual.   When we had finished the display and the hoops were still burning, Ben decided he wanted to do the round again.  Instead of coming to heel as he should have done he just took off again jumping of his own accord through the hoops and over some of the jumps. Brian played up to it, letting the spectators think it was part of the display, but in reality it was one happy, naughty dog having fun. It goes to prove that well trained dogs are happy dogs. 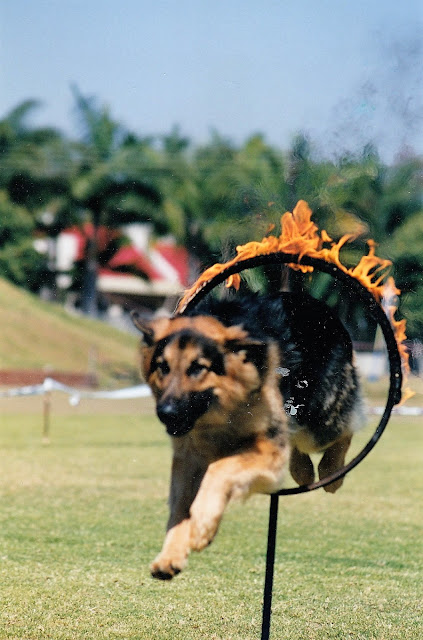