Here we go again.......frantic search for pictures to fit the headings.  I have had it done mentally ever since the new list was put up by Hawthorn and now suddenly the deadline is tomorrow and I have not done anything more than think about it!!

For many years we have had a compost bin that was given secondhand to Hawthorn in 2004.  It was made up of plastic panels that slid into each other to form two small or one large round bin.   Over the years panels have broken and this year become very brittle and not able to stand up to the heavy winds and had developed a decided list windward!  I tried to replace it with something similar but to no avail.  I eventually realised I would have to find something completely different and chose a slatted wooden compost bin (with a 15 year guarantee against rot, which considering our great age I did not know whether to feel good about that or not as I would be 90!!)   The old plastic bin is to the right of the photograph as I still needed to shift the non rotted  contents into the new bin and all the lovely brown compost into bags ready for use around the garden.

I must add that the construction of this wooden bin led to some interesting conversations between myself and B as, like all men, he does not follow instructions.  Just by enlarging the photograph on the web page I could see how it all slotted together but............well, you know, I am sure.  Anyway as the article came without instructions other than where to download them from their web page I did just that to prove my point!! 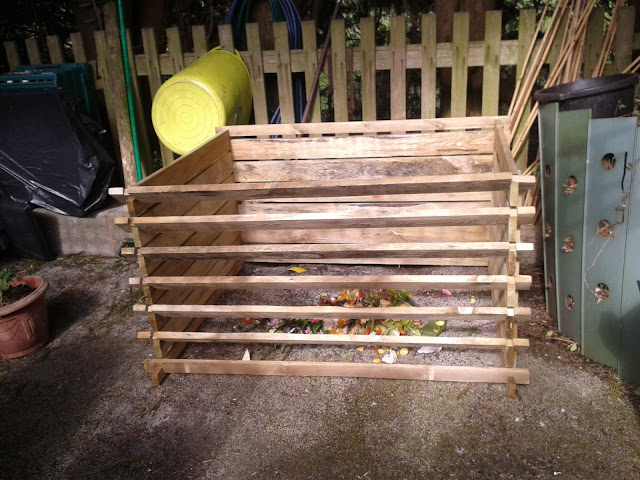 I have changed around the order of words so as to continue with my theme of compost bins!  Our eldest grandson very kindly came across for the day to help us transfer all the non rotted vegetation into the new bin, carefully layering it with soil from last years' flower pots and filling sacks of lovely well rotted compost and in return for his hard work we fed him an enormous pizza, tomato soup and an unending supply of hot cross buns, hot chocolate and orange juice.

The slats came as a flat pack but unfortunately three slats had their ends broken off.  We carried on assembling it but I immediately contacted the seller who apologised and said they would send a replacement.   To our surprise 'replacement' meant a whole new bin, not just three slats, so now as the original one works in its broken state we have two for the price of one!  That is what I call a bargain! 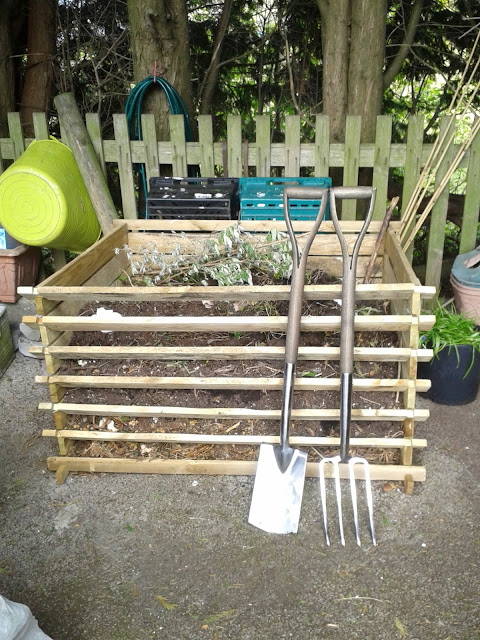 NB   This should  be under new as well as those ladies size stainless steel spade and fork were an early birthday present.

Each year we drive from Lancashire to beautiful Northumberland** to stay in a farm cottage for a week.  When Anthony Gormley's Angel of the North near Gateshead comes into view we start to feel we are nearly there.  The giant art installation is known as Rusty Rita by the locals, hence my link to this category.   The first time we passed it we turned off to get a closer look. It is huge.  See how it dwarfs B as he walks up the hill towards it. If you look more closely you will see a few people standing at the base.

** My banner picture is taken on Bamburgh Beach, Northumberland. 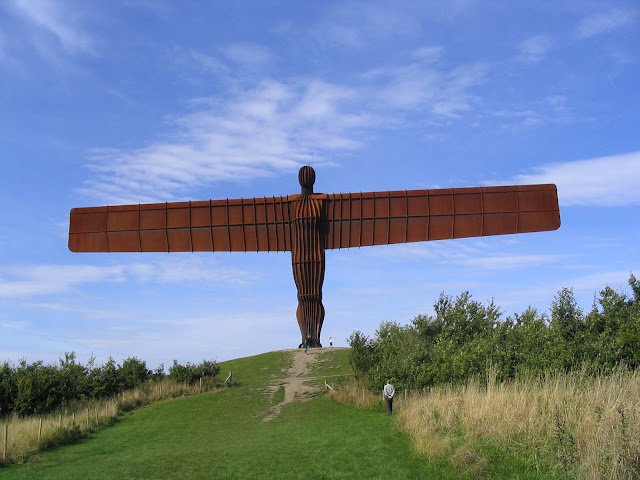 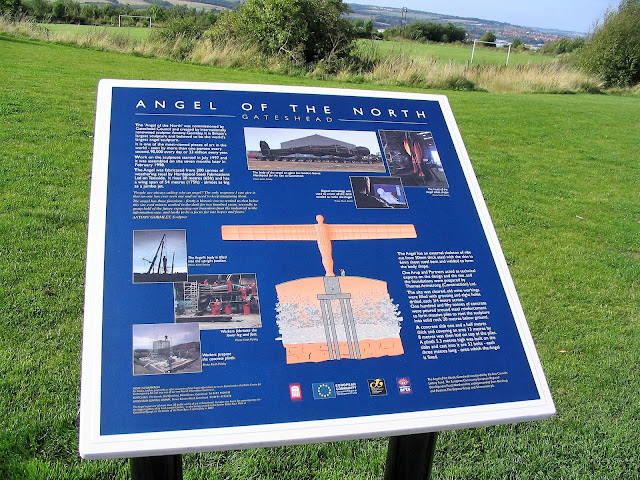 I have just enlarged my original picture and read again the amazing details on this information board then looked up more details on a web page.  I thought it would be more interesting if I copied and pasted the details here as I found them fascinating and thought you might too.

I looked around the house to see which box I could use but could not decide so have arranged  them all together for a group box photograph.  They all have different stories to tell.  The two wooden ones in the back and two in front were given to me by my son and fav daughter-in-law collected on their travels. The Jak the cat tin and the lovely Papier-mâché box were given to me by Hawthorn and the round one with the lid was made by B while playing around on his lathe.  The little glass one my mother used to store stamps in, both new ones in the days when you still had to lick them and used ones that she used to collect for B.  Today I see it has an  odd selection of bits, a McMillan Daffodil, a spare needle for my knitting machine and odd washer or two and a brass thimble that says Use Humber Soap around the side.  But best of all is the old wooden box in the centre made by my father-in-law as a young man in the late 20's to hold his cuff links.  The workmanship is perfect. No nails  or screws, all minute wooden dowels and small piano hinges on the back with a  little brass lock. 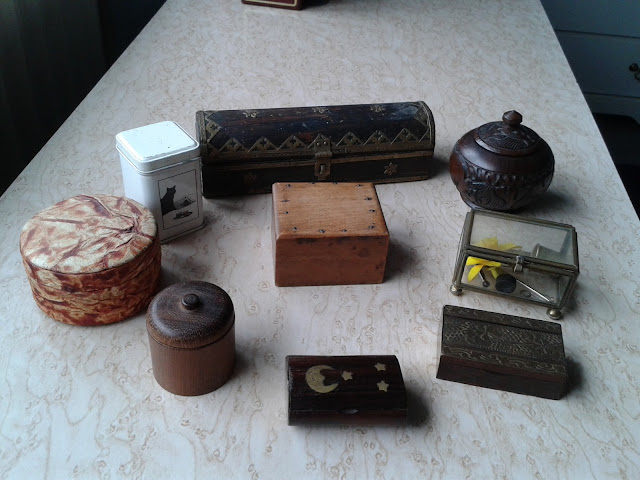 Here I must make a confession.  I very seldom take photographs of my cooking so I  have cheated and pinched this from Images on Google.  Very naughty I know and I apologise.

With so many recipes to chose from I have selected a traditional South African pudding or teatime treat - Melk Tert, which translates as Milk Tart.  It is quite different to the English custard tart and much easier to make as it does not have to set in the oven, you make it like custard, in a saucepan.  You can be good and make a short pastry pre baked case but I cheat and buy them ready made from the supermarket. 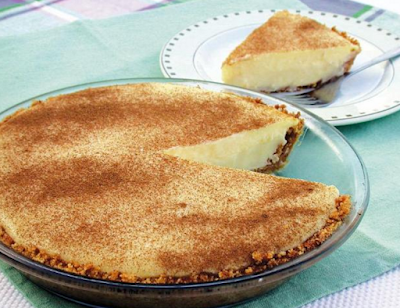 Sift and mix together dry ingredients. Add eggs, beating well. Add a little milk and mix till smooth. Boil together remaining milk, salt, cinnamon sticks (or pinch of cinnamon) and butter. Add hot milk to flour mixture and return to saucepan and cook slowly till thick. Pour into baked pastry shell and sprinkle with cinnamon.

I think I will be forgiven for using this photograph of a very young Hawthorn as I need it to illustrate my story.  I was stumped for a while on what to use for the letters 'D' and 'R' that would be different until B reminded me of Damn Rabbit - I actually can't remember his original name.  We had raised him from a very tiny baby, almost hairless and blind, as his mother had kicked him out of the cage. He was fed with a dolls' baby bottle and lived in the house.  But he had one very bad habit.  Living in a rather hot part of the world and as B worked just down the road, he came home for lunch and then had 40 winks on our bed before returning to work. The rabbit sometimes used to sneak into our bedroom and jump onto our bed and snuggle up to him.  The only problem was that on occasions B would be rudely awoken from his nap by a warm, damp feeling. Yes, you guessed it, it was the rabbit having a wee!!  B would hurl him off the bed yelling loudly....That Damn Rabbit has done it again....or actually something rather stronger. So he became known as That Damn Rabbit!!  (or TDR for short) 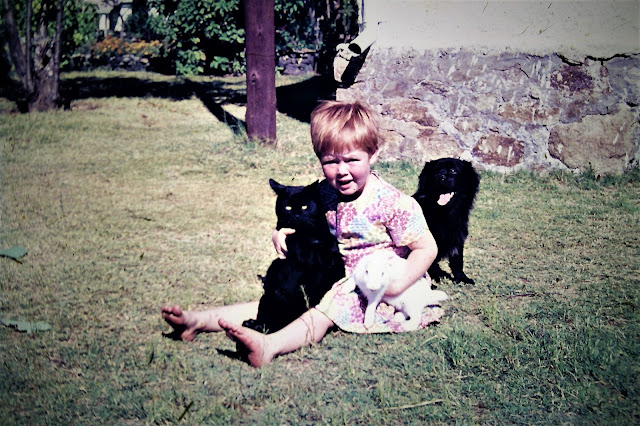 In the photograph Hawthorn is holding  TDR, Barney her little dog who met an untimely death when we moved into the city where he did not know busy traffic and her cat Sam** who lived to the grand old age of 15, a good age in a country where many cats were killed by snakes.

** Sam was named after Sam the Sham (remember him?) as his mother was Siamese and his father obviously a passing black rascall whom he took after until he opened him mouth and he spoke pure Siamese cat!

Writing about TDR has bought back a long forgotten memory.  RTV - Rhodesia Television was in its infancy with only two stations broadcasting, one in Salisbury (Harare) and the other in Bulawayo. They had a children's 5 o'clock club which Hawthorn and her brother belonged to and when it was their birthday they were invited to go to the broadcast on that day. I had a cunning plan! Only some cards were read out each time so I got my parents in Capetown to send an enormous birthday card which did attract attention.  Little H was called up and her card read to her.  It had been signed from Mummy, Daddy, Granny and Grandpa and all the many cats and dogs, ending with TDR. The presenter  Sally Donaldson asked little H who was TDR and was told it was That Damn Rabbit.  She was naturally asked to explain which she dutifully did, in her clear voice; my rabbit wee wees on my daddy and he gets cross and shouts That Damn Rabbit!  We went from proud parents sitting with others in the viewing room to very embarrassed parents, shrinking down in our chairs.  That will teach me to have a Cunning Plan!!

We came across this beauty whilst in the Science and Technology Museum in Manchester.  It is the 'Pender', Tank Locomotive No 3 and is a Bayer, Peacock Locomotive and was used on the Douglas to Peel line on the Isle of Man.  It has a cut away view of the engine which was fascinating. 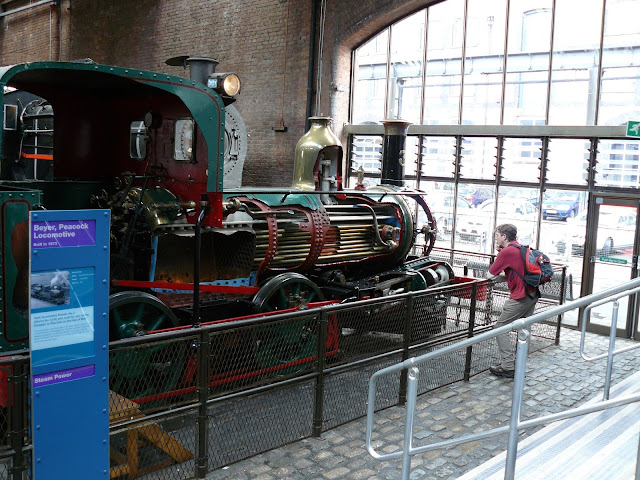 My garden is at last rousing itself from it's winter stupor (or is that a description of me?) and bursting into flower again.  Each year these primulas faithfully come into flower.  I had been given a sack full that had been destined for the council compost tip as they were being dug up to be replaced by summer flowers by the council gardeners. I always think they are rewarding me for rescuing them. 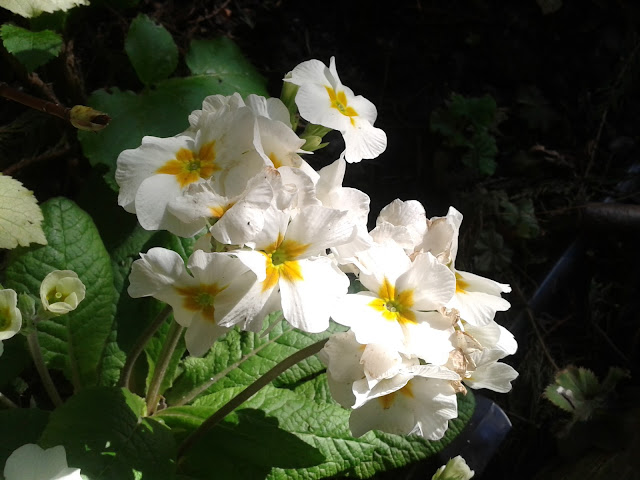 At this time of the year the squirrels are raising their young in their dray.  When they are big enough the mother brings them to our feeding table.  She keeps her young around her till they are able to defend themselves then chases away the males.  The females stay longer and in fact sometime oust their mother and keep their patch - and supply of peanuts!   We are seeing the present mother squirrel when she comes for food and water.  It is obvious that she is feeding babies.   We had Emma for years, each time raising her  young and sending them away till eventually she was the one evicted.  She would come back occasionally to see us till she stopped coming altogether.  She became very bold, asking for nuts by coming to the Goat Willow tree at the side of the lounge or even coming up the passage and into our flat.  When the babies were weaned and teething she would bring them to the Goat Willow tree to chew on the bark for its soothing effect.  Sadly, as the tree was actually growing in the school grounds next door and was damaging the fence, the council came and cut it down.

Here is Emma feeding from B's hand.  She even sat on his lap eating nuts he gave her. 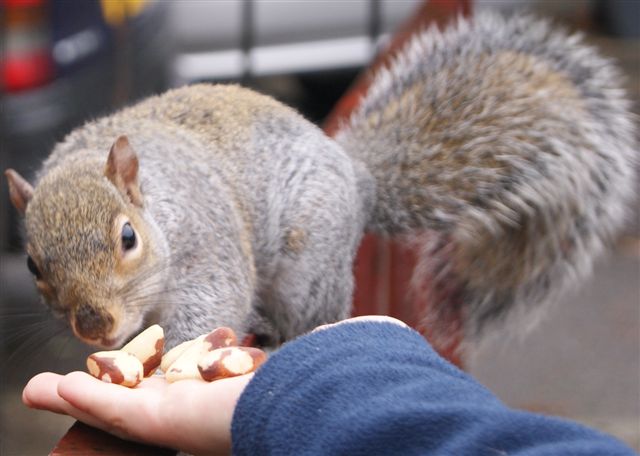