Another selection of words set by Hawthorn for us to match up with photographs, unusual  but fun to do.
To link up with others joining in the fun use this link  here to Hawthorns blog

Followers of the Photo Scavenger Hunt may recognise this scarf.  Last month Susan of grannysmithsquilting posted a picture of a beautiful scarf she had made.  She very kindly sent me the pattern and now I have found my knitting mojo and am making this simple but very pretty scarf.  The actual wool is a darker midnight blue with a little twinkle (not a sparkle, just a twinkle).  By the time this is posted I hope to be finished.  I plan to make it into an infinity scarf.   Thanks Susan. 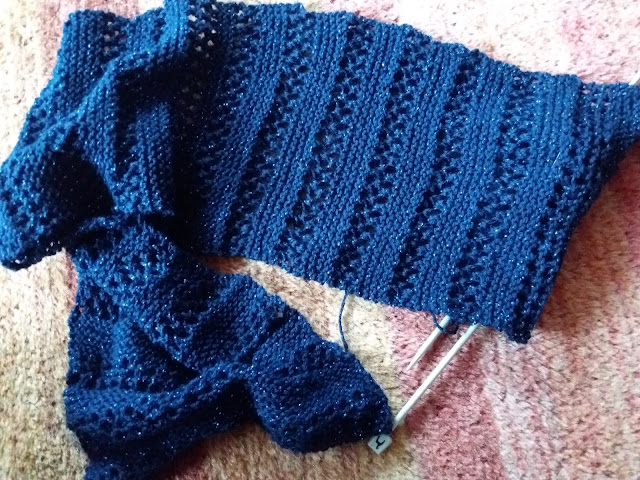 There is it, can you see it?  It is there on the table - between the Dundee cake and pretty bag.  Yes,  it is a jar of FUDGE made for his grandfather's birthday by Eldest.  The picture was taken in Hawthorns' new Studio where we had a lovely family tea party for B. The scones were delicious too. 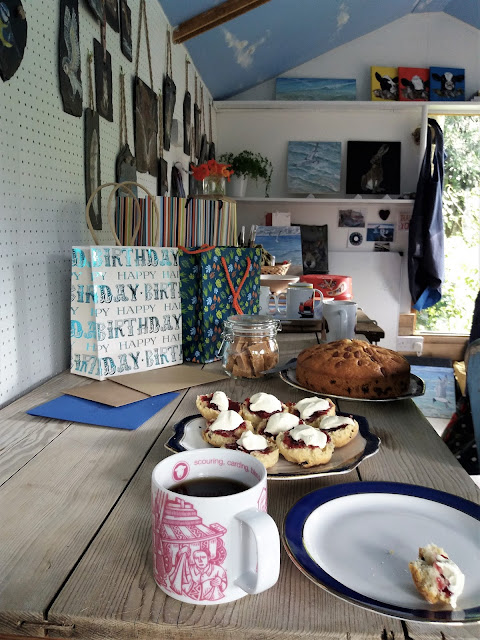 Not only were the scones delicious but the fudge was scrumptious, yummy, delish and did not last long. 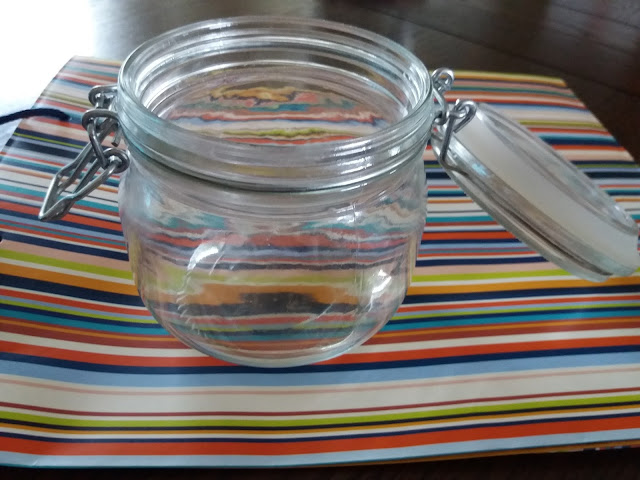 A couple of years ago we had a new bathroom installed.  Under the old bath was some screwed up newspaper.  It did not look as though it was deliberate like some sort of time capsule rather as though it had been wrapped round some fittings, all crumpled and discarded.  I carefully smoothed it out and then ironed it.  It was a few pages from the Daily Mirror dated Saturday, November 15, 1986. Those who know Steve Wright from original BBC Radio 1 and now Radio 2 will know he is as bald as a coot!  Funny to see him with all that hair!   As I am typing this I am listening to 'Steve Wright in the Afternoon'. I keep telling myself I should forward him a copy of the paper.

We replaced the old newspaper plus a copy of the newspaper of the day as well as the TV guide for that week in a properly sealed plastic bag and perhaps someone else will find them all some day. 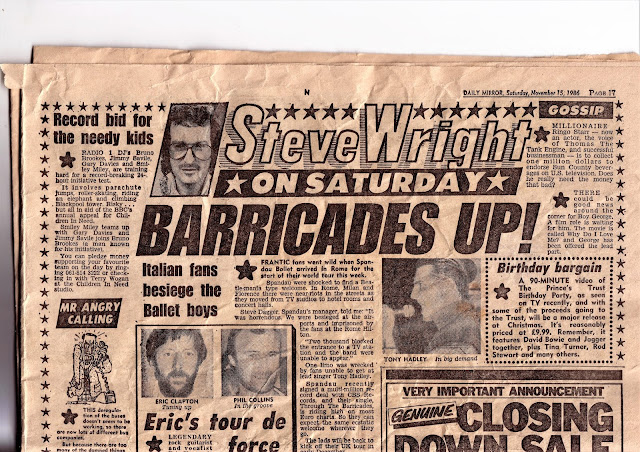 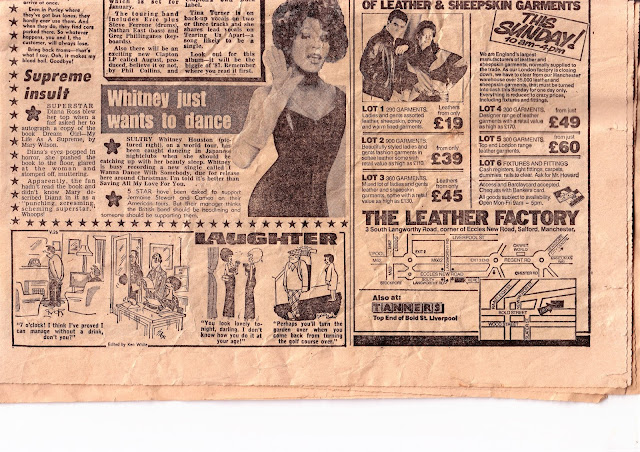 This was quite a difficult one for me.  Those who know me will agree - I'm not the neatest person. I hate untidiness but battle to keep things neat and tidy.  I call myself a 'professional stacker'.  I make piles of things - neat piles on the dining room table, another on my desk.  So I wracked my brains and then suddenly remembered this.................. 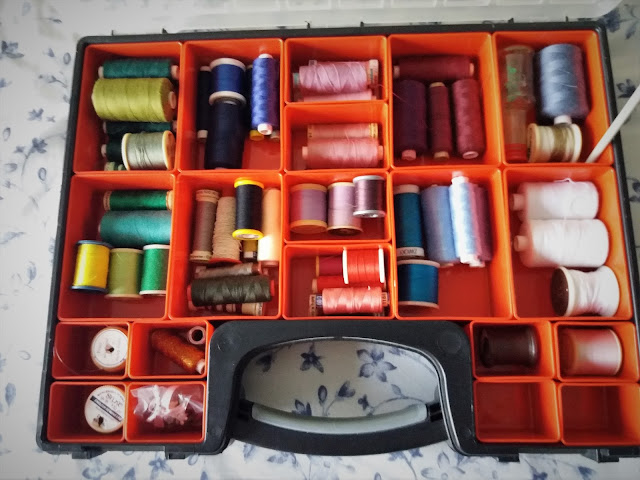 Not bad for me!

Some years ago we had a wonderful holiday staying in Hawkshead in the Lake District.  The little village had some wonderful little nooks and crannies to explore.  We particularly liked this old cobbled street - even more so when we saw what its original name had been and wondered what crafts had been practised in the little old houses. 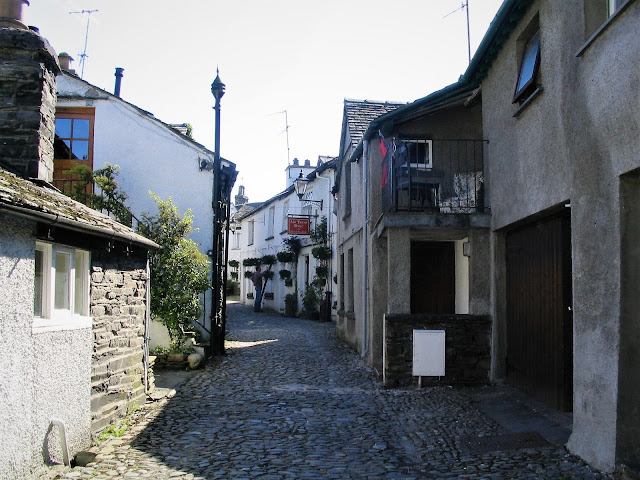 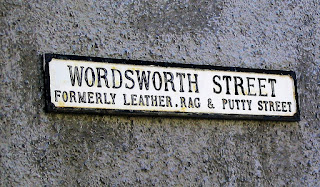 'The cobbled street was once busy with cobblers, cloggers, saddlers, harness makers, putty makers and clockmakers.  William the Conqueror's grandson, later the last Norman king, Stephen 1, included Hawkshead and its environs in his 1137 endowment of Furness Abbey.'
Wonderful what you can learn from Google.


I wracked my brains for this one.  I have an ordinary bog standard kettle, I searched through possible places for a copper kettle and then remembered The Copper Kettle Cafe in Dartmouth, Devon, but that photograph was taken in the 1980's......where on earth would I find that old picture. (I had even considered Kettle Chips).  I then went into my neighbours kitchen and there on the worktop was a copper kettle, not an old one but a fashionable retro one, a much more interesting kettle than mine.  So I asked if I could borrow it for a few minutes to photograph. 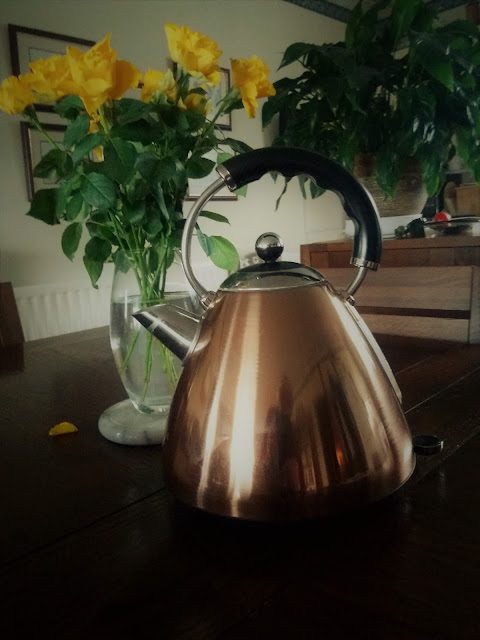 This past month we have had to have all the Leylandii  trees removed from one end of our garden. They had become too tall for safety and were already losing large branches in the wind into the neighbouring school playing field.  As much as I have always disliked the trees they did help me develop my 'secret garden' in the shaded area and also gave some definition to the whole vista.  Our landlord and a friend of his came to remove them.  They had to be careful that the trees fell away from our garden as B has his shed and I have a greenhouse right next to them. On most days they had used a tractor with a raised bucket with ropes tied to it to guide the trees down in the right place.   I took lots of pictures of whole trees falling into the school grounds.  All this took a few days and eventually I got a bit blase about it all and stopped rushing out to film or photograph it all.  Then one lunchtime as I was standing at the kitchen window there was a huge crash and the latest tree to be felled had landed on our garden shed roof.  Our lumberjacks said a sudden gust of wind had lifted the falling tree and it twisted round onto the shed!   The one day they had not had use of the tractor to guide the falling trees this happened.  There is still one more tree to take down, it is right next to my greenhouse.  They are now waiting to the rain sodden playing field to dry out a bit so they can get the tractor in to guide this final tree - they are not taking any chances again! 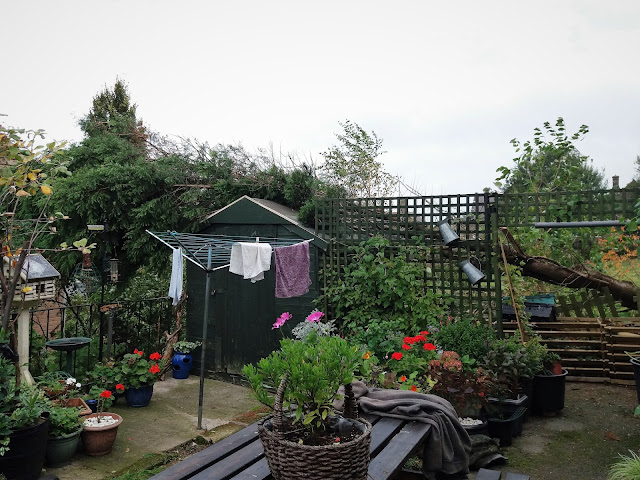 Fortunately there was no damage to the actual shed except a tiny tear in the roofing felt and all that had happened was for things to bounce off the shelves inside onto the floor. It had smashed through the fence too.   Don't know which was more unexpected, the tree on the roof or the fact it did no damage!  (Excuse the washing on the line!)

Well two actually.  They have mirror images on them so I am showing the back and front.  My mother's uncle was in the Merchant Navy during WW1 and was stationed in and around China.  He brought these two 5 inch Chinese vases back for my mother when she was about 14.  They are very well travelled as my parents moved around before and during the war then moved to Northern Rhodesia, leaving a couple of trunks containing wedding presents and other precious things with friends in St Albans.  When they had settled down in Lusaka the two trunks were sent out by sea, one of which was stolen so I am very lucky these survived.  They are only about 5 ins high and I love them.  We have  never had them valued so they may be worth only a few pounds or we might have a small fortune sitting on the shelf.  (Hope it is the latter.....I can dream, can't I?) 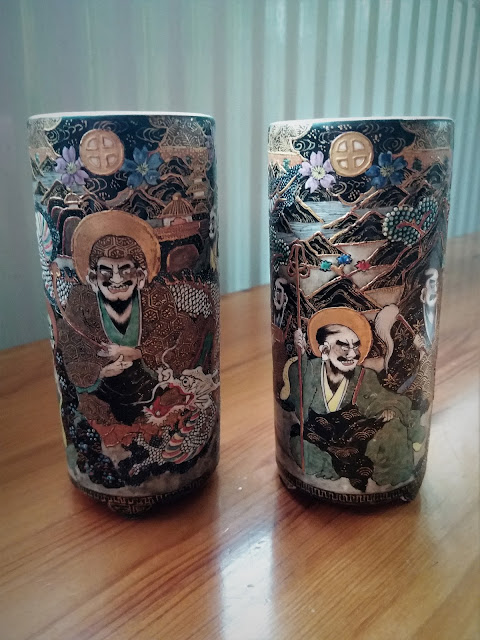 Every year I plant up pots of potatoes.  I buy seed potatoes from our local garden shop, carefully chit them then plant up three potato bags, several buckets with holes and one huge 60 litre pot. Their smallest bag usually has too many potatoes for my limited garden space so when I saw some seed potatoes in our local Lidl I bought it as it was half the size of my usual packet.  I planted up the three potato bags, one bucket with some new potatoes that had started to grow in my vegetable rack and the rest of the seed potatoes into the large 60l pot.

Come harvest time we started on the three large potato bags and got just enough new potatoes for two meals from the three bags! 😕  The 5l bucket with the sprouting new potatoes was much more successful - enough from the one bucket for a further three meals. 😊 Eventually we got round to the large 60l pot.  It usually has a plentiful supply of new potatoes for us.   Below is the sum total of potatoes from the huge pot!  😞 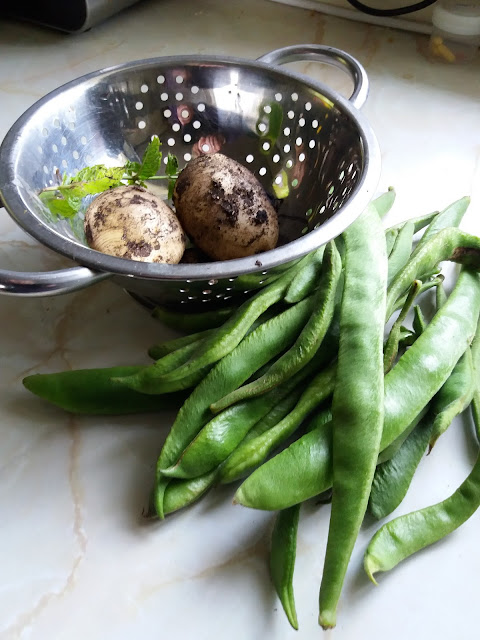 At least this year we had a good harvest of runner beans!  I've learnt my lesson - buy seed potatoes from a proper garden shop or better still, let some new potatoes go to seed in the vegetable rack!!