Well Hawthorn, you have made it difficult for us to choose which ones to select with your much longer list!  I know I for one prefer to not have to choose,  just do your selection!!  Makes it much harder, even with the greater selection.  But here goes with my eventual selection.....

This is a picture of my father taken in the Broadcasting studios in Lusaka, Northern Rhodesia (now Zambia) in about 1948. Before the war he had his own band and played professionally for Tea Dances in hotels in Eastbourne.  (As a point of interest here he had very flat feet and was colour blind so was ineligible for the Air force or the Army so he, together with his whole band, was called up and became members of ENSA, the Entertainments National Service Association,  and travelled around army camps entertaining the soldiers).

After the war we travelled overland through Africa down as far as Lusaka where he joined the Central Africa Broadcasting Corporation.  He also played at dinner dances in the largest hotel there as well as recording half hour programmes of 'Music for Sundown' broadcast on a Sunday evening.  He would buy sheet music of the latest musical shows and films and then put his own touch – 'adding the twiddly bits' he used to call it.  When this photograph was taken at Broadcasting  House he must have told me he was working on ‘Buttons and Bows’ which was from the 1948 film The Paleface, starring Bob Hope and Jane Russell.    I was only 6 at the time and misunderstood what he was doing and for many years I thought he composed it! Pity he didn't....think of the royalties! 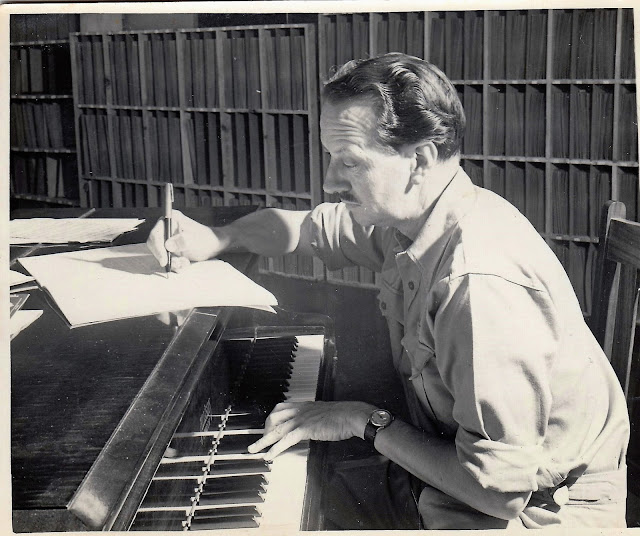 A group of eager faced Brownies and Guides waiting to shake hands with Lady Olave Baden-Powell when she visited Lusaka as part of her tour of Northern and Southern Rhodesia, South Africa, Swaziland and Basutoland, all British colonies in those days.   (Modern day Zambia, Zimbabwe, South Africa, Swaziland and Lesotho). I remember how excited we were as all the packs gathered at the Lusaka Girls School in March l950 but although this was a very important day for all the Brownies my main memory of the event was trying to find the girl's toilet and having to ask one of the 'big girls' (presumably a girl guide) where they were! 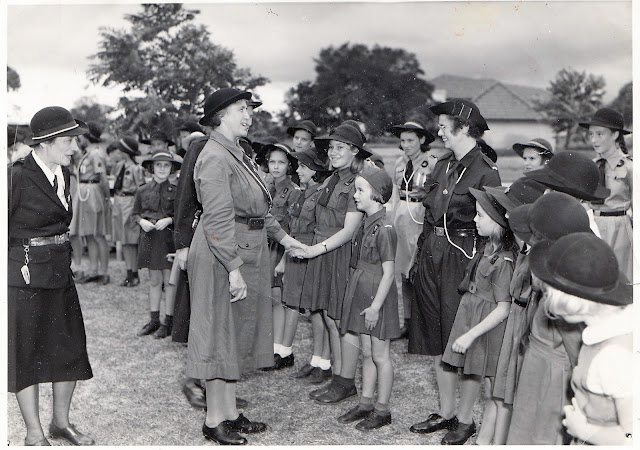 Lady Olave Baden-Powell with her daughter Chief Scout Betty Clay.  Our Brown Owl was Mrs Palmer and her daughter Ann with fabric hat is to her right and I am on her left wearing the regulation brown hat.

This was not one of my original choices but after seeing such a spectacular sunset a few  nights ago (the one mentioned in an earlier post by Hawthorn) I decided to use the silhouette of the trees over the road.  I do have a problem with photographing sunsets at certain times of the year.  I get such an excellent view of the vast skies outside our window but the sun often gives too much light which can mess up my photographs, especially such brilliant show as this one.  I was using my camera phone which I had only had a couple of days and have not tried out various settings yet.  In  hind sight I should have taken them with my proper camera. 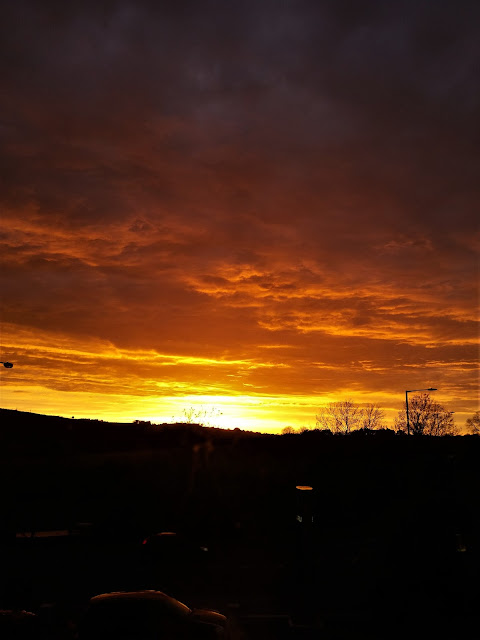 I love avocados but find the ones available here in the UK very small.  The Haas is minute and the  larger one is only a bit bigger.  Perhaps we have been spoilt.  In the Southern Hemisphere where we lived for so many years, they are huge.  When we were living outside Bulawayo, Zimbabwe's second biggest city, we had an avocado tree just outside the kitchen door.  It had not had much of a crop the year we moved in and we were advised of a local tradition to improve yield.  One was to bang some large nails into the trunk - perhaps there was a lack of some mineral in the soil but the one that intrigued us was to take a big stick and beat it!  So B did just that.  Gave the trunk some huge wacks.  Not sure which of the two worked but all the time we lived at Khami it produced the largest avocados we have ever seen. We knew them as Custard Avocados which could only describe the creamiest fruit you  have ever tasted.  I had a Salter scale in those days, one of those with an oval shaped bowl and the fruit filled the dish almost completely.  From memory, I seem to think they weighed 3 lbs or more.  Below is a normal Haas, looks large but it is on a very small chopping board!!  Compare it to normal sized sprig of mint next to it. 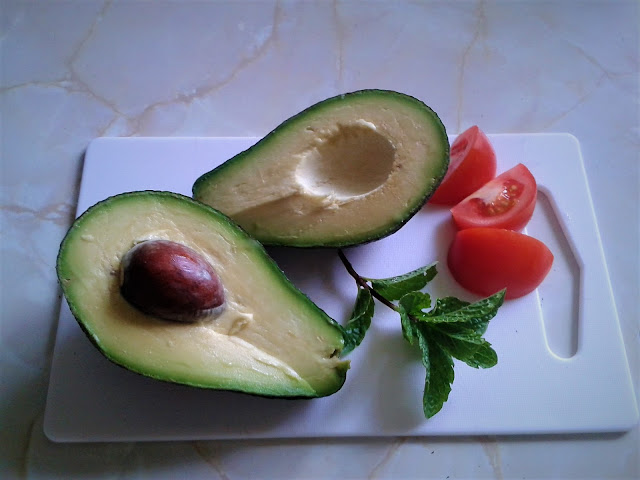 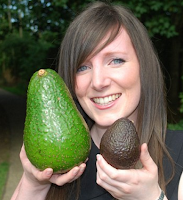 There, I knew I wasn't dreaming. I have just googled 'large avocados' and there they were on sale in a certain supermarket here in the UK described  as a rare supersize fruit weighing an average of 3 lbs and coming from just four trees grown by one of the world's biggest suppliers in South Africa.  (They have forgotten to count our tree in Zimbabwe ..but well that was 40 odd years ago! )  It is described as having a fantastic taste with a rich, juicy, buttery texture and creamy flavour.  Just as I remember it.


Sadly that is not me in the picture, just some pretty girl in the shop advertisement which I snipped off Images on Google. After typing the above I realise that perhaps neither of our methods used above worked, it must have been a large variety all along and we just made sure it had lots of water!!

Take your choice, there are at least a dozen there, actually a bakers' dozen, I have just recounted, the rest are lemon buns.  Each year I would bake my daughter-in-law 3 dozen iced cupcakes for her to take to the office on her birthday.  I am no expert but had lovely fun decorating them with butter icing.  Sadly she and our son have now moved to Scotland, a bit far for me to make them for her this year!! 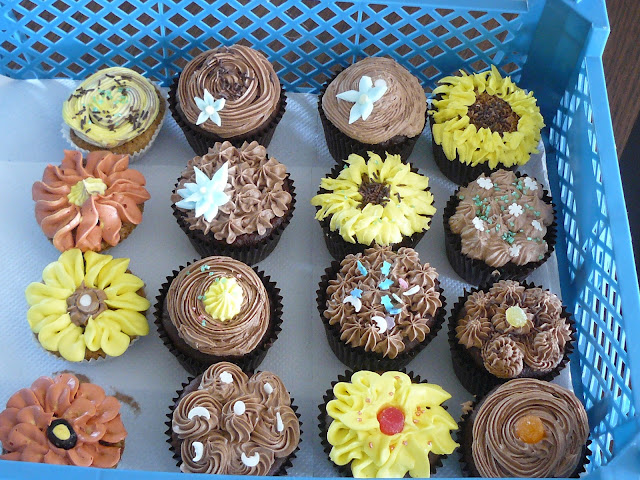 After years of resisting it, I finally learnt to crochet in about 2009.  I had never been interested as most crochet articles in my days in Rhodesia (Zimbabwe) were either doilies or toilet roll covers!  So why bother!!

Hawthorn did not knit or crochet other than the little she had learnt as a school girl. But then suddenly she started crocheting;  her sister-in-law taught her one holiday on a beach in Northumberland.


I looked with envy at the work she was producing so decided......anything she can do..........I may not do better but at least I can try. So between H, daughter-in-law and other Knit and (K)natter friends I finally managed it.  The first large article I made was this huge blanket.  Looking at the photograph I can see uneven tension and other errors.  But I was not happy with the stripes, too obvious, so Hawthorn suggested I weave (there is the word I was waiting to use) cream wool through the holes in the work using a large darning needle. You can see where I had started it.  I had made it with carpet wool which was heavy enough to start with but with the extra cream wool it became very cumbersome and not very cuddly or sniggly at all.  So it, together with my next similar effort,  ended up with son and daughter-in-law's Labradors.  They loved them, they weren't fussy!! 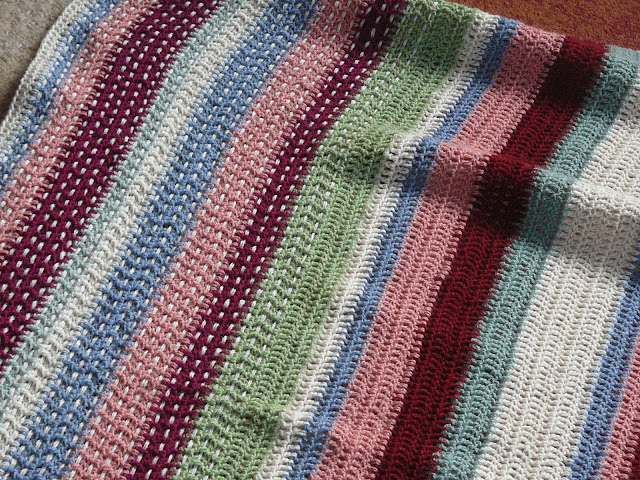 Now here is a word that means different things depending where you live.  Here in the UK it is a plant, a shrub in the garden like a rose bush but to us that have grown up in southern Africa it has a totally different meaning.  Here  you would go for a walk in the countryside, wandering around in woods or forests, across green fields but to me a walk in the countryside is a walk 'in the bush'.  That conjurers up memories of walking in long African grass, more often brown than green or sitting quietly in the car in the Kruger National Park (KNP) watching lion, buffalo, giraffe or the smaller creatures like some of the varied bird life walking through the bush.  In fact just writing about the bush and searching through our many photographs  makes me feel quite 'bush happy' bringing back memories.  These photographs and the one below had been taken with a very ordinary camera, no fancy zoom lens.  The lions had just appeared out of the bush and were about to cross the road ahead of us and the elephants were just browsing by the side of the road. 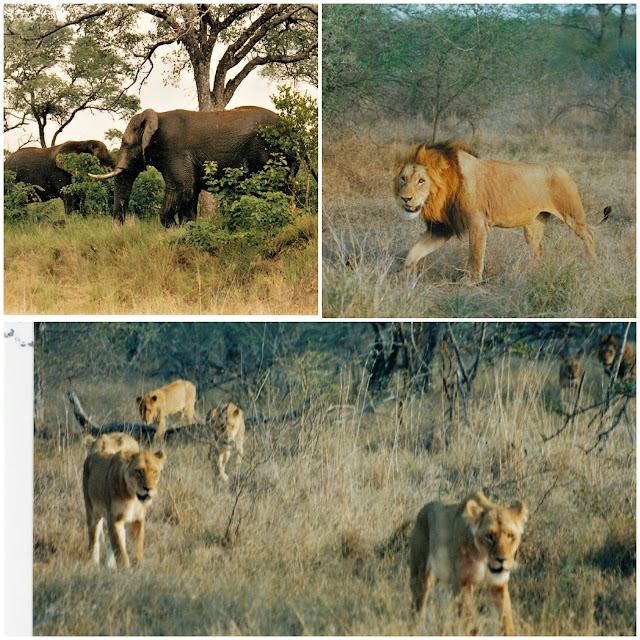 Yet another African story and again in the KNP.  Hawthorn and G (Himself) came out from the UK to stay with us and we booked a few days in a rest camp in the Kruger.  The advantage of staying rather than doing a day visit was that you could get up early, grab a cup of coffee and get out into the park just as the camp gates open at 5 am, an hour before the main gates for the day visitors.  We had done just that and were driving back towards the camp for breakfast when a leguaan or monitor lizard at least 1 metre long crossed the road in front of us and disappeared into the long grass at the edge of the road. We had stopped and I was peering out the car window watching where he had gone trying to see him again when I realised I was looking between two large, light coloured straight 'poles'.  I suddenly realised these were not poles but the legs of a giraffe just beyond where the leguaan had disappeared and I was staring under his belly. Wow, he was enormous with the longest legs that went up and up.  When you remember that when a giraffe gives birth standing up as they do, the new born baby drops 2 metres or more to the ground, it gives you some idea of how tall they are. 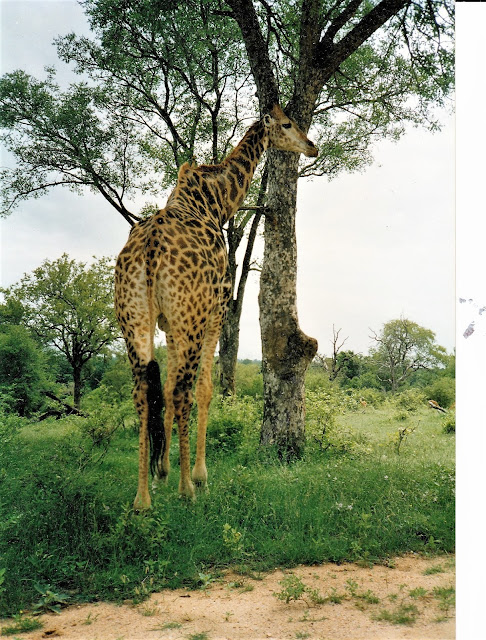 Today, the hottest day this year, B and I went to Bolton Abbey, near Skipton, Yorkshire for a walk along the river and picnic lunch.  We go each year about this time as my mother's ashes were scattered there some years ago and I know how much she loved sitting by the river where we had our lunch today.  It was lovely and cool walking along under the towering trees. There were still plenty of bluebells about and huge banks of wild garlic were in full bloom, When I checked over my photographs I saw this one and thought 'how cool and green that looks' so it had to be my choice for this topic. 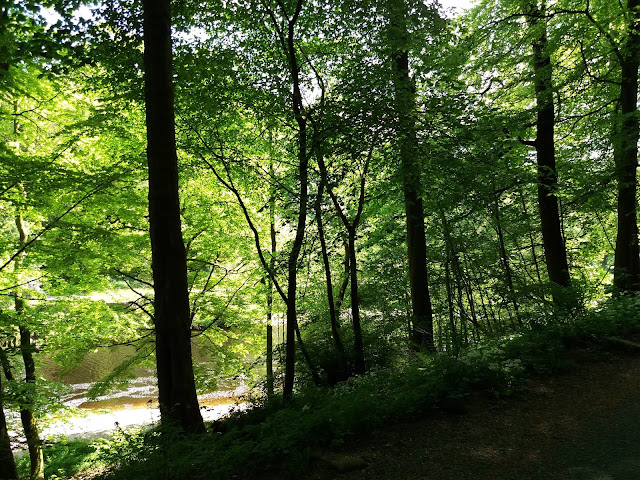 Well, what can I say about this display I saw in a second hand shop in Colne, Lancashire but .....Ouch!! 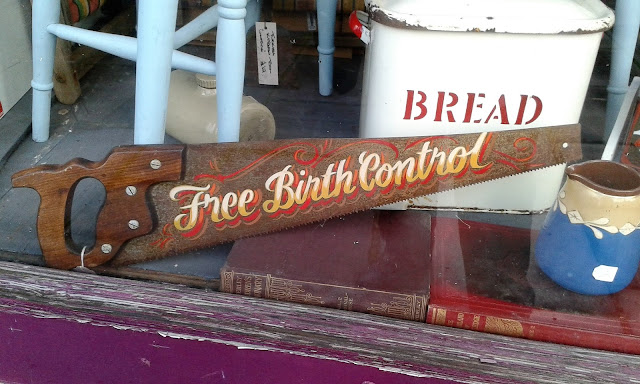 PS   Hawthorn, the long list was not so bad after all.  I kept changing my mind about which topics I would choose as I found more suitable photographs.