It's a grey miserable day, rain falling, trees bare and it's getting dark earlier but looking through my old photographs should have cheered me up.  The only trouble is I have lost two thirds of my photographs going back to 2005 when moving them on to my new computer.  Don't know why or how.  I had fortunately previously put them all on a photostick gadget which sucks out every picture from your computer - that sounds fantastic till you realise that they are taken out of their files and put in a completely different order.  So now all my photographs numbered 1,2,3 etc are in that order - all the 1's then all the 2's etc, then any labelled (not many unfortunately) are in alphabetical order and finally all those downloaded from my camera with the cameras numbers  are in numerical order.  So nothing makes sense. I spent the whole afternoon going through them pulling out those I could possibly use here.  I might add that there are thousands of pictures, 1751 of them are duplicates!!!   So that is what I must do this winter, as well as sort out all the actual photographs from albums - got far too many.  So forgive my random selection.  I have not been out this month to take any pictures either.

This is a cake and scones I made for Kate's birthday a couple of summers ago.  It was a lovely summer day and we sat out in the garden.   All that cream and the strawberries must surely qualify as a 'Sweet Treat'. 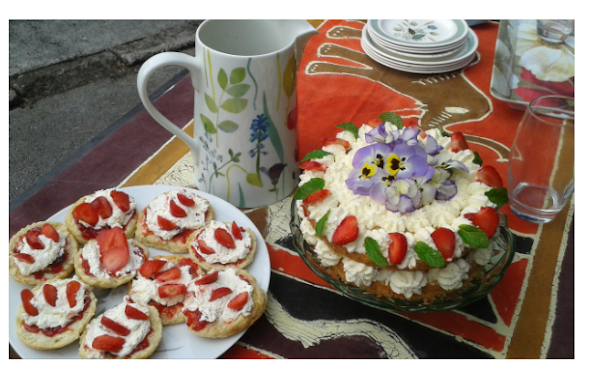 Starts with a 'W'
I was spoilt for choice here but eventually settled for this lovely one of dear Roxy, who is no longer with us, wearing my daughter-in-law's Wellies. 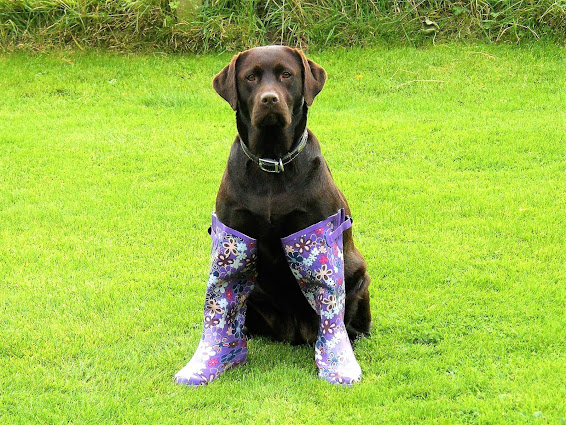 I just have to have one of my favourite wild animals - the comical Wart Hog. They are so ugly with their tusks and warts but somehow they always make me smile.  The family will run in single file following the male or female with their tails straight up in the air.  Like domestic pigs they love rolling in mud and root for their food whilst kneeling on their front legs.

My daily bible reading guide, together with an Alexander McCall Smith book.  I had the complete set - well thought I did, I then found this one I had not read.   The turquoise book underneath is being deliberately concealed as it is a present for daughter-in-law and  it has not  been put away with other Christmas presents as I keep dipping into it. 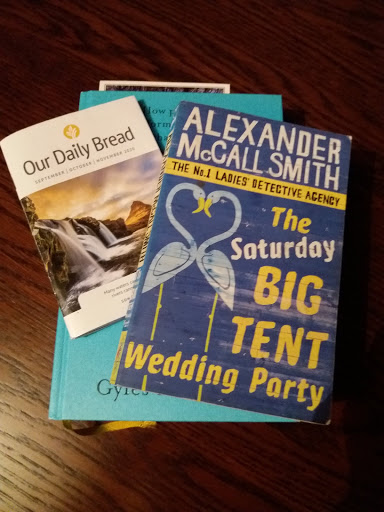 Something Purple
Again I was spoilt for choice.  Looking through my zillions of pictures I was surprised how many purple flowers I had photographed over the years and then I found this picture............. I couldn't not use it!!   He is one of those still life models that you can have your photograph taken with for a donation into his tin.   He did not move in all the time we watched him, just his eyes with an occasional blink.  This was taken in 'The Shambles' near the York Minster. 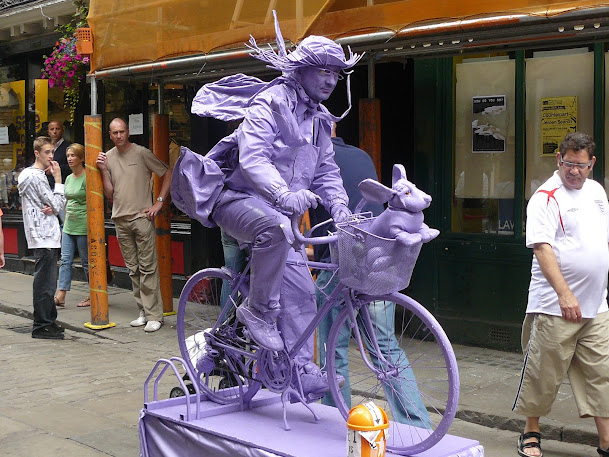 This beautiful purple Streptocarpus was given to me by Eldest grandson years ago and each year gets better and better. 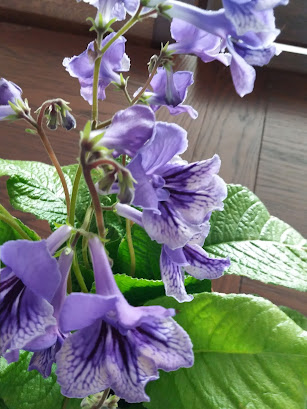 Some of you may remember Herbert the Hippo that lay in the water at Kwa Maritani Game Lodge.  I photographed him with terrapins on his back in the sun and Egyptian Geese sleeping on his back for safety at night.  Well this entry could well  be called -

An Eulogy to Herbert, the patient Hippo

Every night we would watch out for Herbert as he lay quietly in the water till about ten at night when he would lumber out of the water to go and graze.  (For all their being responsible for the most deaths by a animal of  people in Africa they are only grazers).   Then later he would be there again with his two geese standing in their place on his back.  By day the terrapins would scramble onto his back to sun themselves in safety.  He was a long time resident of that particular pan and just spent his days  quietly in retirement.
Then one morning recently I noticed a lot of comments on what had taken place overnight at Kwa and seemingly another male hippo had come into his territory and there had been a bitter fight to the end and the elderly Herbert was killed.   As the rangers always leave nature to get on naturally they just moved his carcass away from next to the lodges as they knew its remains would be eaten by scavengers and rot in the heat.   We miss seeing him each night just lying quietly in the water. 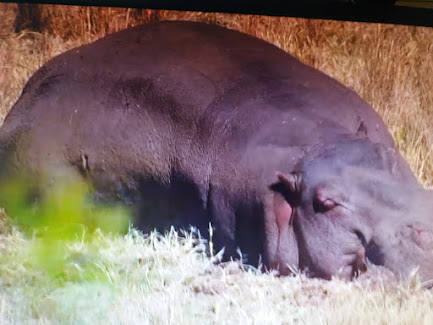 Turning pink in the sun.  Hippos excrete a pink waxy substance to protect their skin in the heat. 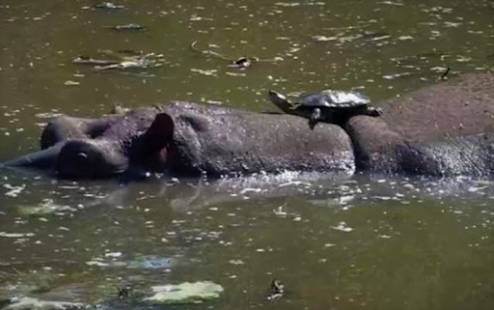 Lying in the cool water with his terrapin passengers! 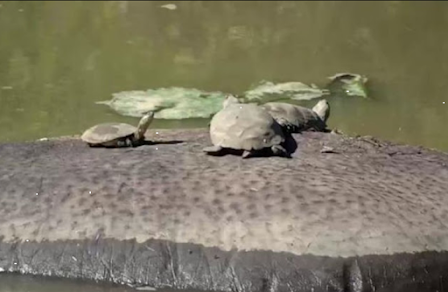 Egyptian Geese keeping safe overnight away from the edge where predators may catch them. . 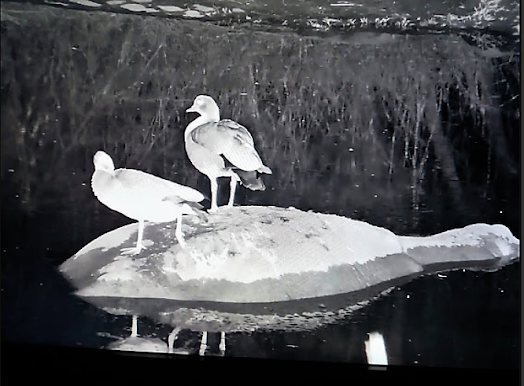 Now a more cheerful note on which to end up this month.
This was taken in 2008 outside Abbots Harbour restaurant in East Martin Lancashire where we had stopped for tea with our son and daughter-in-law and their two dogs, Roxy and Jess.  We  had chosen an outside table when a couple came walking along with their dog and tied him up outside whilst they went in to order.  His earnest but resigned little face made us smile at the time but now it is most relevant........wearing a regulatory mask at a restaurant!!   Little did we know then!! 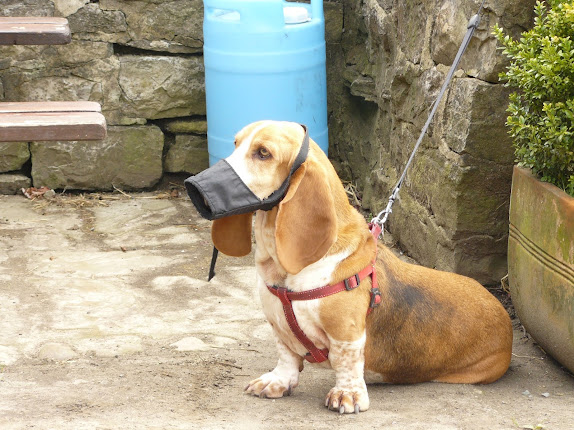 That's all for this month.  Now off to see what everyone else has done.  Keep safe and well. xx