August, where has this strange year gone?  We've been out a bit more this month but still very cautiously.  Only go where we feel we are safe or within our family bubbles.

List for this month had me searching through the archives again.  Well,  here goes....

With B being in government service we were transferred round Rhodesia - then in South Africa when he was in hospital management we were moved around the country as we did not have school children to take into account.  So whenever there were problems with striking nursing staff off we went again as B was very good at sorting out Union problems.   But in all those moves, 30+ , we never took photographs.  Maybe because in those days films had to be developed, no free digital pictures like today and we did not have such convenient camera phones.  So I literally had two photographs which fortunately fitted the bill.  But as both had Kate and G in them, I asked and was given permission to use them.

Here we are on the move from Hemel Hempsted to Lancashire prior to returning to South Africa in l990.  I only took the pictures because of the name of the removal firm!! 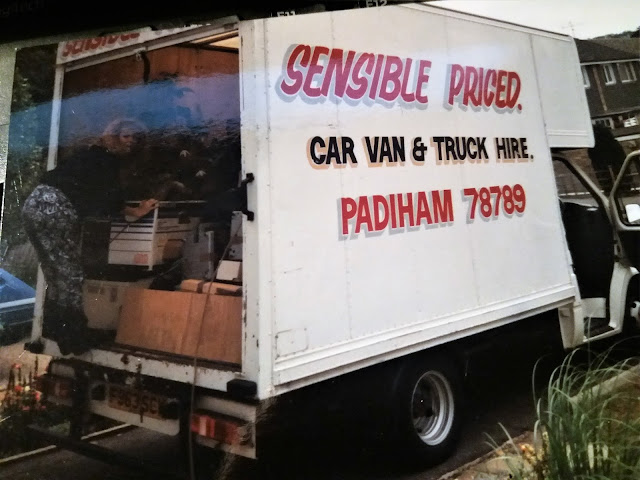 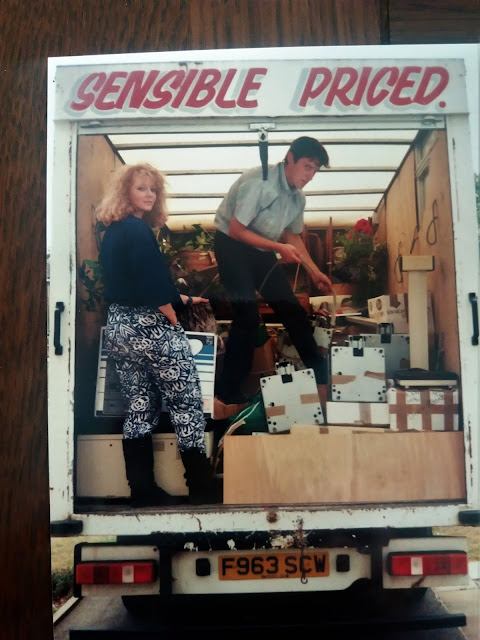 B and I decided to take advantage of the "Eat out to help our" scheme.  For those non British bloggers the UK government wanted to encourage people to go out to eat to help get the restaurants back on their feet again after lockdown.  Each person got a 50% discount on food or non-alcoholic drinks to eat or drink in participating establishments to a maximum of £10 discount per person. So you only paid for anything over £10. What a bargain.  So we went to a lovely pub on the nearby canal and had a steak.   Looks good, doesn't it? 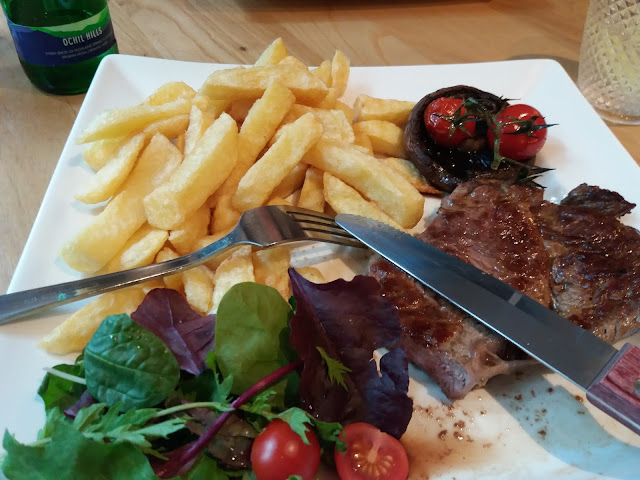 
Lions sleeping off their breakfast after an overnight kill.  Look at the size of the male's feet and head, let alone his enormous belly!! 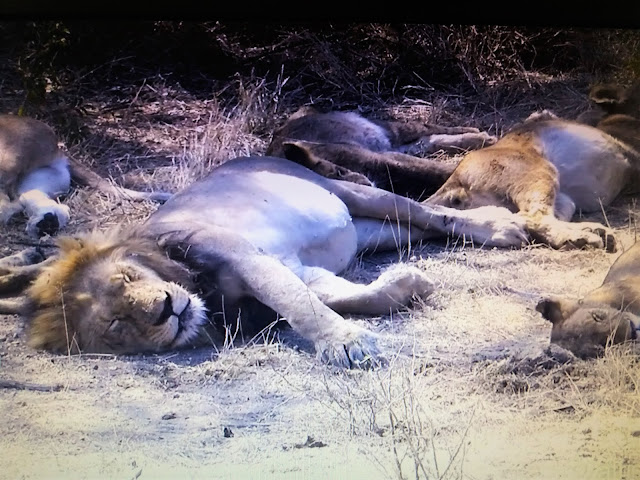 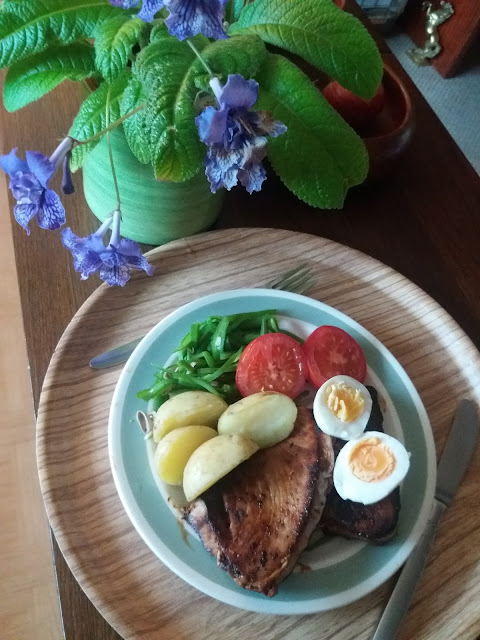 I must be honest, I have done no craft, knitting or crochet since lockdown started.  I have to resist baking as it is only B and I to eat it and that is not a good idea!! So I was wondering what on earth I could use for this prompt.  Than as I was cooking supper I had a brainwave - photograph what I was 'making'.


So here is our supper, Salad Nicoise using Yellow Fin Tuna steaks.  Not used them before. They were delicious.  I had marinated them in honey and soy sauce as I know tuna can be a bit dry. We did enjoy our meal.

You may remember the view of this dam from the picture of  white  rhinos having a drink at Kwa Maritane  in my  June blog.     A few nights ago we were checking all the Africam.com  channels LINK and to our horror saw this picture of an enormous fire coming down the hills behind the dam. 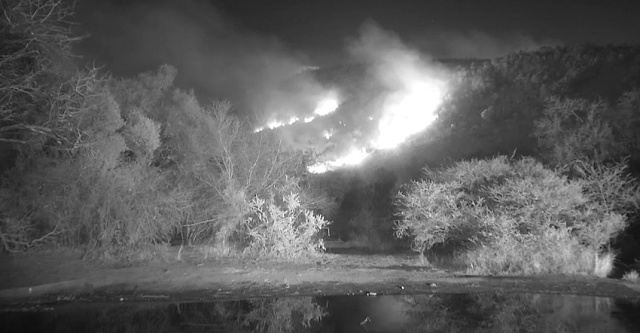 Next morning when I checked the site you could see it was still burning. 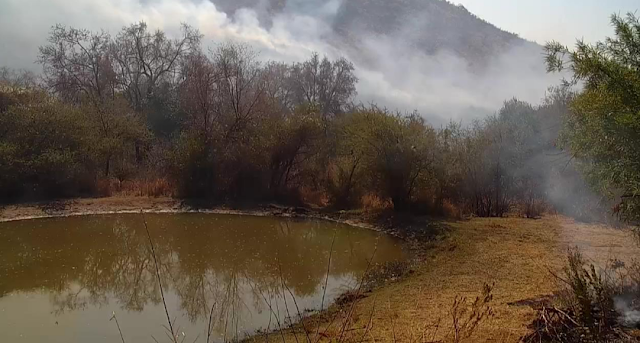 But by evening it had not only flared up again but moved round towards the lodges. 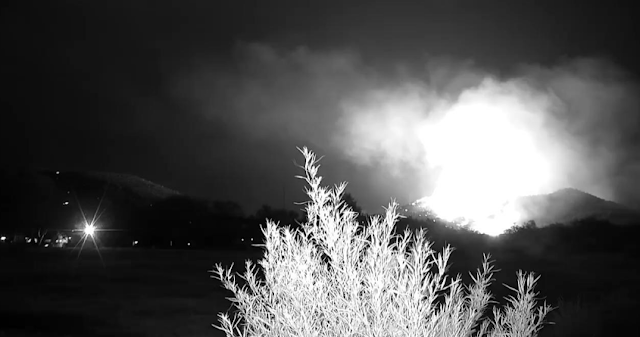 You can see the lights of the lodges. 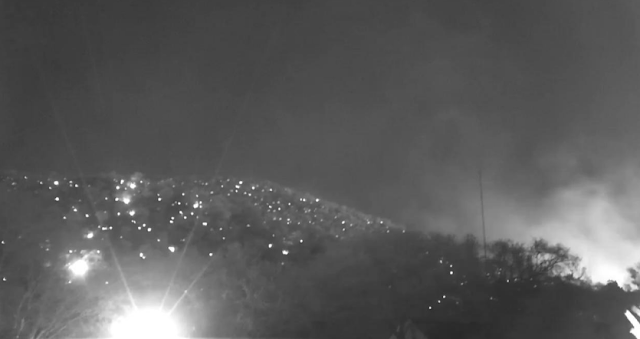 Getting closer. All the small fires are fallen trees still burning. 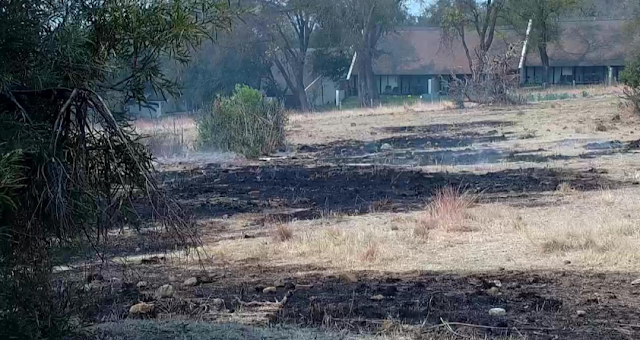 Thankfully by morning it was under control but the burnt grass in the field in front of the lodges show how close it had been the night before.

For new readers of Kate's monthly photo hunt, my husband and I keep an eye on the  Africam.com site most evenings while watching TV and when the computer is not being used during the day.   I take photographs of the screen with my smart phone of all the different animals to be seen at any of the eight cameras set up at different game reserves around South Africa.  Nearly as good as being there and a reminder of the many happy days we actually were able to do that.

Now off to see how the other bloggers have interpreted the prompts.