Greetings to all fellow followers of Kate's fun blog and best wishes for 2019.

Another year, another interesting selection of topics though my thinking cap  has been working overtime with month.


I drew a blank on this one since first reading the list then as I was packing away the surplus Christmas decorations I saw this pile of tinsel and baubles lying on the table and thought.....metallic. We have downsized from a 6 ft to a table top tree and are sending the now unwanted - no that sounds a bit harsh describing our beloved decorations - unneeded decorations to the charity shop along with the large tree. 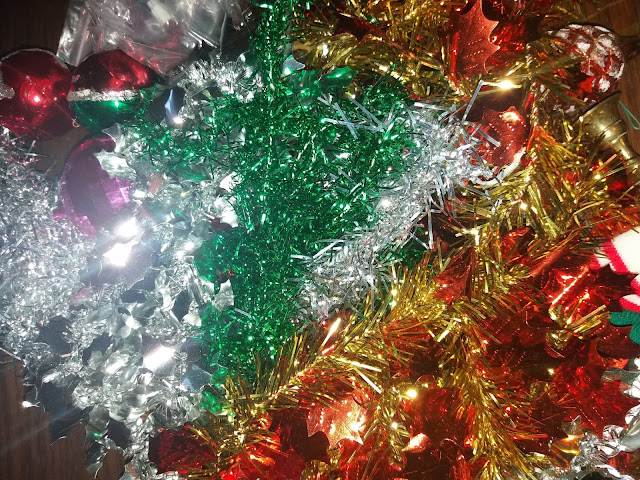 I must admit, I have not really made anything much this year except some knitted woolly hats.  I was inspired by seeing a programme on our local news about an event in Manchester where knitted hats, gloves, scarves and socks etc were being given out to the homeless and rough sleepers.  I rather felt I could knit beanies (knitted hats for our non-UK bloggers) rather than sit and twiddle my thumbs as I do not  have a project on the go except a jersey that I am struggling to finish.  So that is what I have been doing.

The felted hare is something Kate made me ages ago and the Tomte (Swedish Gnome) she made me for Christmas.  I could not pack him away with the decorations.....he would have not liked that...so I've kept him out.  Now I have a problem...I put him on the bookcase and he jumped off overnight.  I tried another bookcase and he was lying on the floor in the morning.  Now I have foxed him, he sits in the middle of the dining room table with the hare. He can't jump off that! 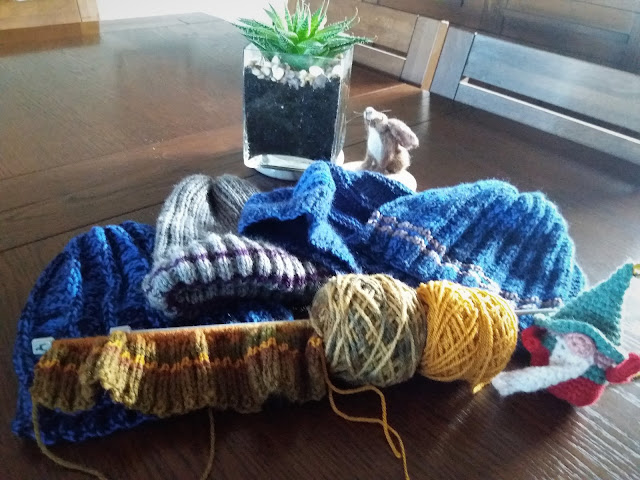 What is aged, wine - got none like that, a gnarled old tree - none immediately round here, us - well there is a couple living here that qualify but that is not very original. So as this month we have been looking and photographing wild life roaming round a reserve in South Africa  (details at end of blog) I thought I would take inspiration from there.   We photographed many elephant but this gentleman is the oldest, known as a Big Tusker for obvious reasons.  There are not many left in the wild as they have sadly been poached for their ivory.  But here at the Tembe Elephant Game Reserve in Qua Zulu Natal there is this one. You can also see he is old  by the sunken areas above his eyes and rather bony back. 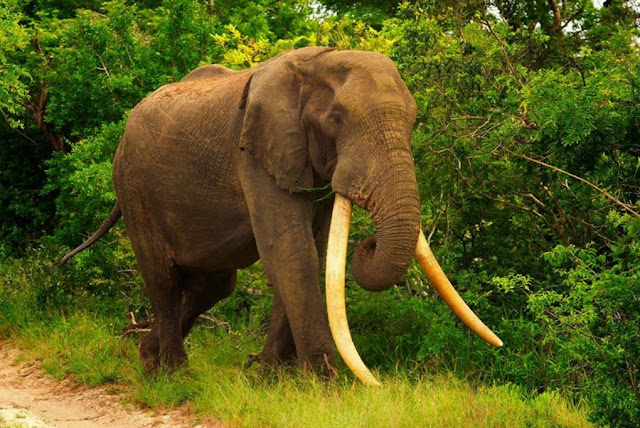 Following on this same theme here is a younger and more modern version of the old man above. Two females, each with a new baby and one has the previous offspring there too. 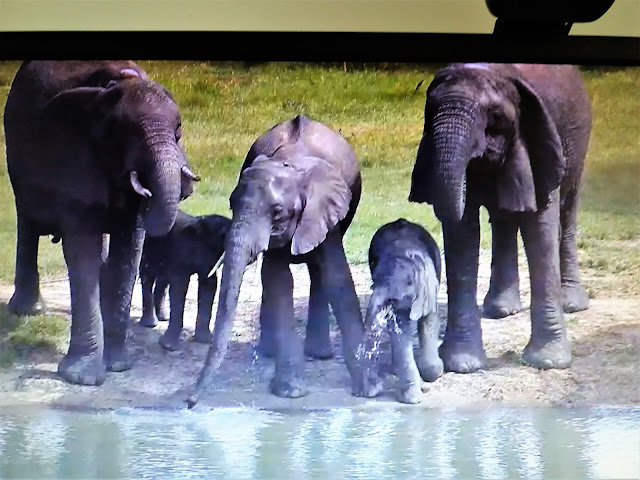 Again a selection of pictures taken of animals at various drinking pans since Christmas.  We are spending hours watching them.  The computer is on all day till bedtime and I am just using my iPhone camera to take pictures of the computer screen - it is quicker than taking pictures via their web site but the quality is not always that good. 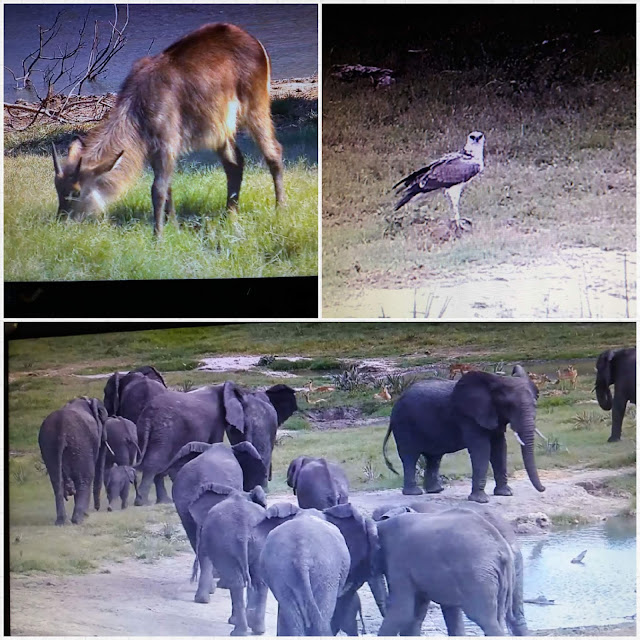 
Female and young Nyala  drinking at Tembe.
Pair of Giraffe at the cat-EYE pan (no idea why it is called or set out like that).
Wooly necked stork at Tembe and zebra drinking at Naledi pan. 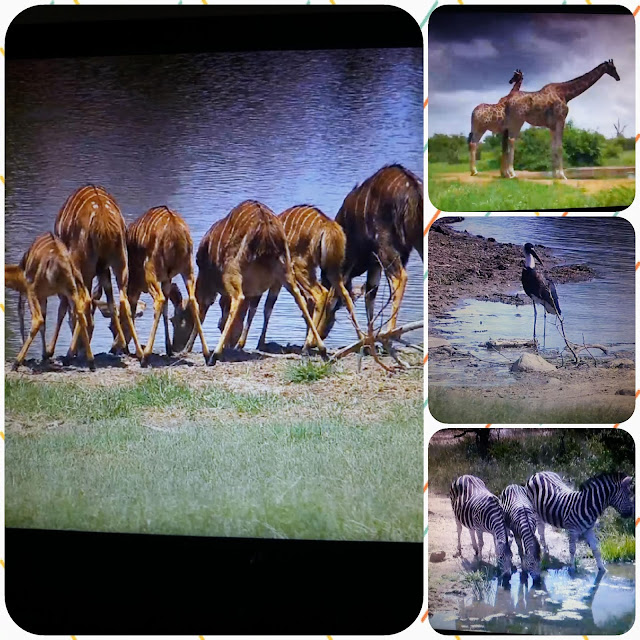 You can even watch at night as they have lights and special cameras operating.  This is a African Spotted Genet hunting. They have the longest tail of all the cat family. 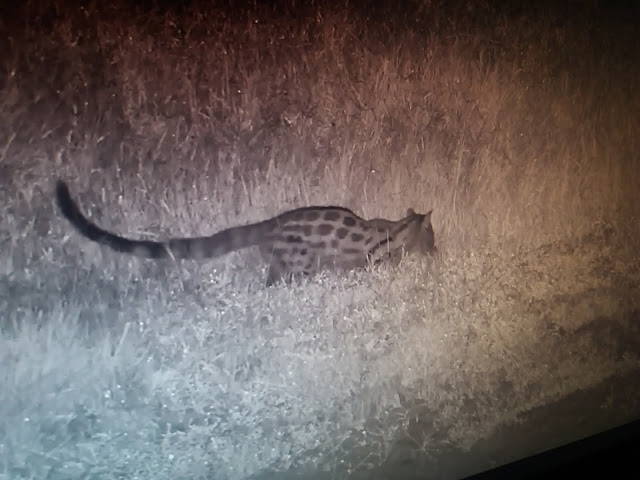 Finally I just love this sign.  I must be honest and say I pinched it off their web page. 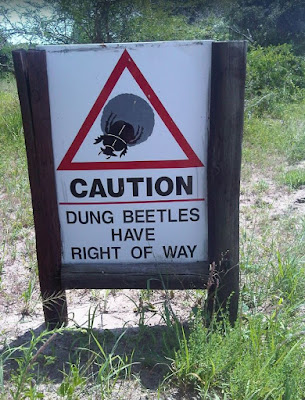 If anyone feels like watching wild animals under a sunny South African sky this rather dreary time of the year this is the link............. Africam

There are about five different watering holes to choose from but we have found Tembe the most successful.  O. River is the Olifants River.

So far we have seen elephant, giraffe, zebra, lioness, leopard, a long tailed spotted genet, a single buffalo, hyena chasing a small herd of buck, baboons, vervet monkeys and hippo (the latter two at Olifants River),  antelope namely kudu, nyala, bush buck, and impala, social weavers with their hundreds of nests in one tree at Tembe, grey heron and a pair of woolly neck storks as well as other bird life.  It's worth a look, you may even get hooked as we are.  It's rather like having one of those original screensavers we all used to have!
Posted by Jak at 12:00 pm 23 comments: