I gather Eldest had a hand in choosing these words with more than one meaning.  What a challenge some of them were.  Had to think far out of the box this time. Very far in some cases.   Well done!
I am once again joining in with Hawthorn Spellweaver photo treasure hunt - to see her blog and links to other people who are taking part, click  here.

Meet Herpes.  She was a very handsome crane that lived on the jetty on one of the islands in the middle of Kariba Dam in Zimbabwe/Zambia.  She was so named as, like herpes, she never went away!!   She sat waiting for the fishermen to come back in their boats rather than go fishing for herself!! 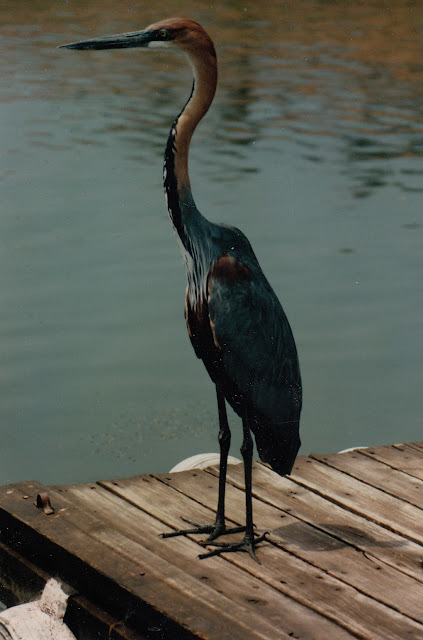 This red lifebelt stands sentinel on top of the hillside overlooking a vast beach in Northumberland. Officially known as Cocklawburn  but we call it the Fossil Beach as it not only has many fossils in those rocks you can see below but also at the base of the hill, especially after a bit of a rockfall.

Looking at the weather-worn post holding the lifebelt makes me wonder how long it has stood guard there and how often it has been used. 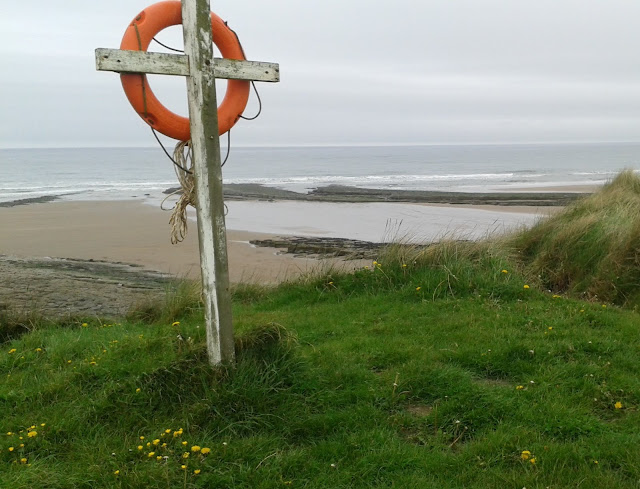 One of the many fossils to be found when the tide is out.  This is a small example of a fossil but one of my favourites. 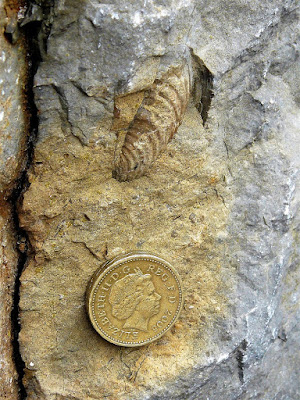 
In 2015 a friend gave me a large shopping bag full of crab apples and as you can see I made a lovely lot of Crab Apple Jelly.  I did not know the fruit as it is something we did not grow in Africa (I was more used to making guava jelly) but it set beautifully.  Did not last long unfortunately. 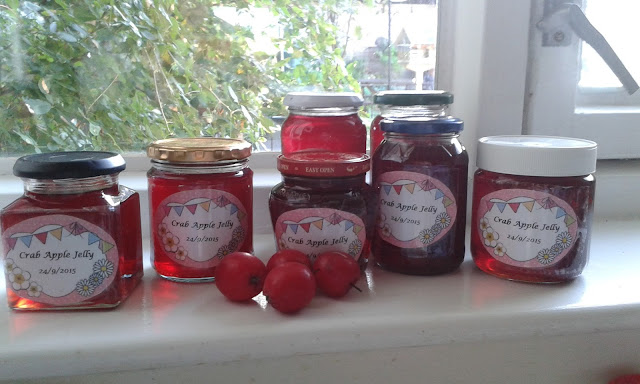 This is a picture of Berwick-on-Tweed lighthouse taken in 2008.  The boys have grown a bit since then, they now tower over their father! The lighthouse has also taken on a much smarter appearance as it has had a coat of paint.  It is located at the end of the pier from where there are tremendous views down the gorgeous Northumberland Coast.  It was built in the 19th Century and guides shipping to the entrance to the River Tweed and Berwick Harbour.

You may have guessed from my banner picture, the Northumberland Coast is a favourite of ours and where we go each year for a stay in a farm cottage.  We wait till the summer school holidays are over then have the beaches to ourselves - not  that they are that busy in the holiday season.

I must confess to not being the photographer in this case, it was our son - the other tall one in the family!! 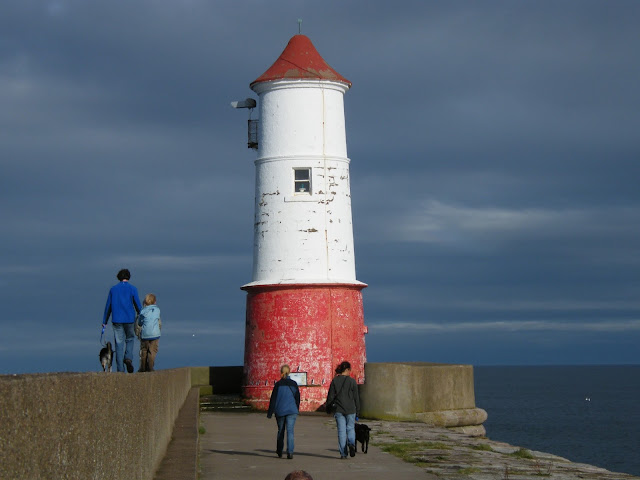 Strangely enough I don't have any pictures of a bow in my huge selection except this Christmas decoration which is one of my favourites.  He looks edible but perhaps fortunately is not. 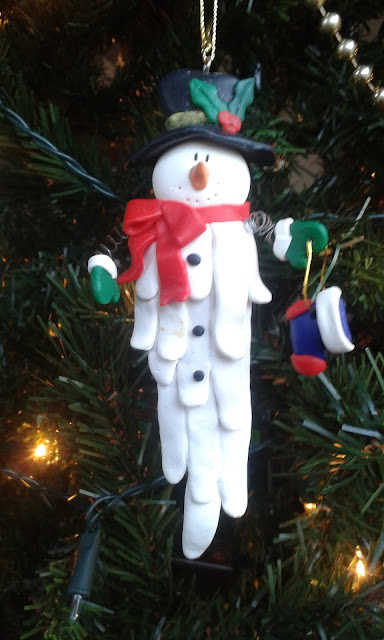 
Many years ago, when clearing out some branches to give more light to my Secret Garden, B cut down a dead tree but left the stump as the roots were helping hold the sloping heavy clay soil from slipping further.  I then found this car spring in amongst the rubbish there and remembering how Hawthorn uses odd industrial finds in her garden,  I put it on the stump. It has sat there for years, only really showing when the branches of that large fern next to it die back and the new branches unfurl. 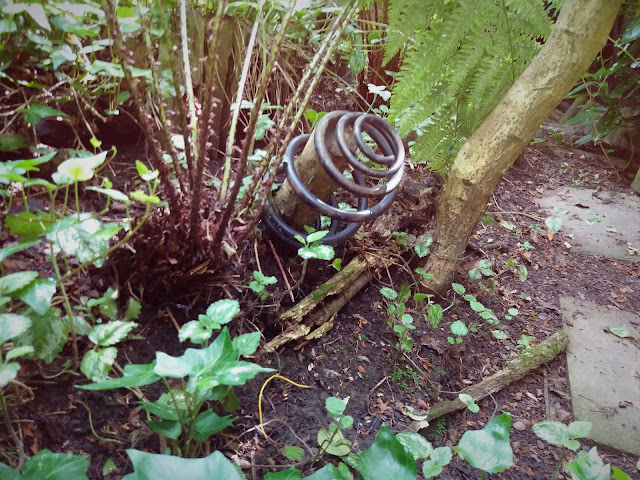 I must be honest and admit I did not take this photograph, it was sent to me by my good friend Lynette. She and her husband are taking a year long caravan holiday in their home country of South Africa before moving to their retirement flat in Scottburgh on the South Coast, near Durban.  They are moving around according to the weather, exploring the Rand area till it got too cold then moving to the South Coast for the mild winter there.   What bliss!

They check out many of the farm and road stalls and cafes wherever they are and came across this one near Bela Bela (previously known as Warmbaths) north of Pretoria. Lynette often sends us pictures that she thinks will catch our fancy and this certainly did, we found it very amusing. 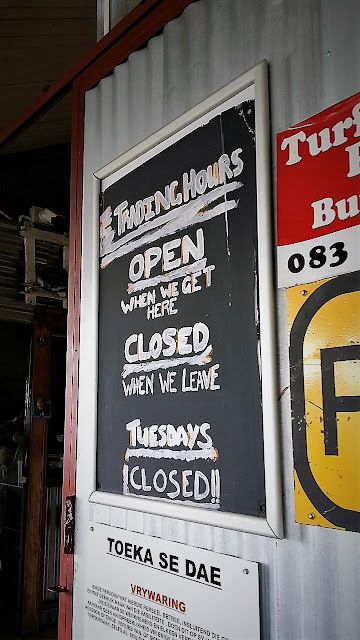 As a matter of interest Toeka Se Dae is Afrikaans and translates as 'Days of Yore'  as it was a very rustic road stall.

Firstly I must apologise for the quality of this picture but as I know many of you enjoy my African stories I thought this one of this very grand dry cleaners in Giyani, in the far north of South Africa, would make a very grand story.

B was transferred to be manager of a psychiatric hospital in Giyani and as always I was guaranteed a job there in the Occupational Therapy Department.

One of the first things we were told about by the African matron there was to be very careful using the local dry cleaners.  Only take clothes in for cleaning at the beginning of the week we were warned. Seemingly the proprietor of the shop had a second business running from his premises.....he hired out clothes for the weekend from the suits and posh frocks that came  in for cleaning!!   Needless to say we never used that dry cleaners.  But the picture on their window always amused me.  Bearing in mind it was supposed to be a dry cleaners it was strange that the lady in the picture was washing clothes in the traditional African way, on the rocks at the side of a river!!  Another reason we chose never to take any dry cleaning there!! 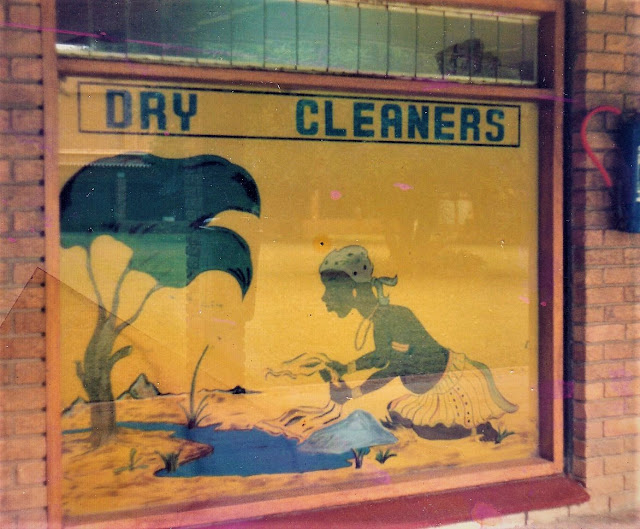 As I said above, I apologise for the quality of the picture.  I had to enhance and adjust it tremendously just to get it to look this good or should I say grand.

Our local park in Sough used to have the most wonderful playground until 'elf and safety' decided it needed a new 'safe' one.  Not only did it have this fabulous helter skelter but a rocking horse on a spring that could really rock, a old fashioned see saw,  a long rocking horse that seated about 10, a roundabout that you could jump on and off, old fashioned swings that would go really high and then you could jump off and those double swings rather like a little boat.  There was also the skate park you can see in the background of the picture.  Now all that is gone and it is a very safe, boring modern playground.  So glad our grandsons are long past that age.  Below you can see B watching Youngest coming head first down the helter skelter. 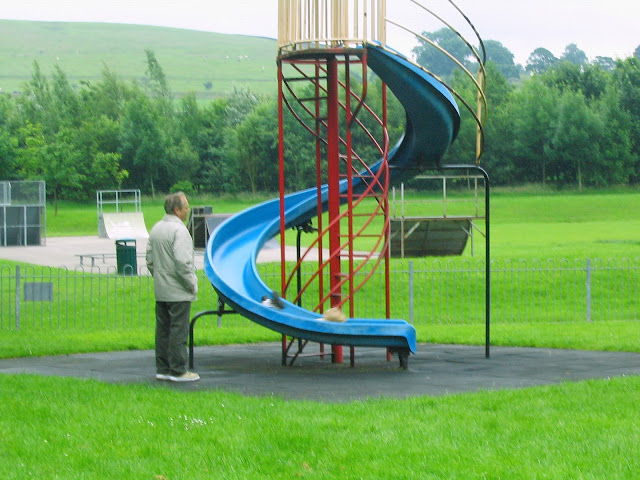 So many of you had such complimentary things to say about my secret garden I thought I would share this picture with you.  It is not a very pretty one, I must admit, but it makes me feel good when I see how far B and I  have got making our Secret Garden.

When I stand admiring the cool greenness I deliberately shut out this part of the lower garden behind me.  As I have said before, we are last flat in a group of four.  Nobody else has bothered to do anything to theirs although we do occasionally cut back the ivy in the next door garden before it smothers the trees there. If I turn round and look under our bridge and our neighbour's decking, this is what our garden looked like in 2002 when we started working on it. 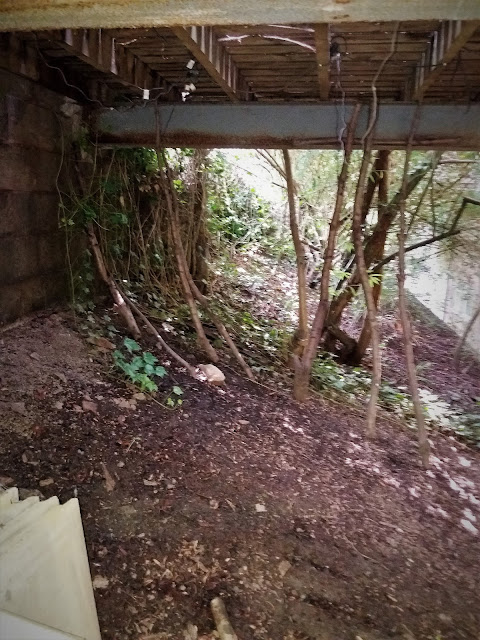 Hawthorn helped us terrace the top bit and put in steps down the centre. B put up a fence to make me feel more secure working down there. There is an 8ft drop down over the edge to what we call the moat.  Together we cleared enough rubbish to fill just less than 200 black bags, 144 of which we found in the garden. (It is very windy higher up at road level and bags had been left by the refuse collector and blown down there).  It was filled with dead shrubs smothered by the wild honeysuckle that grew there, dead pot plants, 7 very dead Christmas trees, many still in their stands, nappies, toys and of course beer bottles and cans. Lovely!

Our son and daughter-in-law gave me flag stones for my birthday that year so we laid paths. B dug out blocks of clay so we could make beds filled with compost and grit to improve the soil.  He also laid a sprinkler watering system as part of the garden is very dry under Leylandii trees.  Our grandsons, now they are older, help with odd jobs down there during their school holidays. Hawthorn has given us many shade plants from her garden to help fill it.   So it has been a family effort. But worth it.

Just a reminder of how my secret garden looks now. 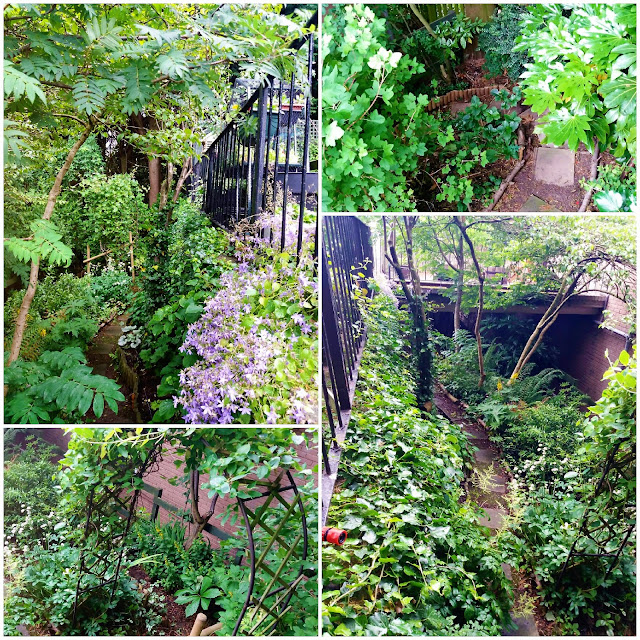